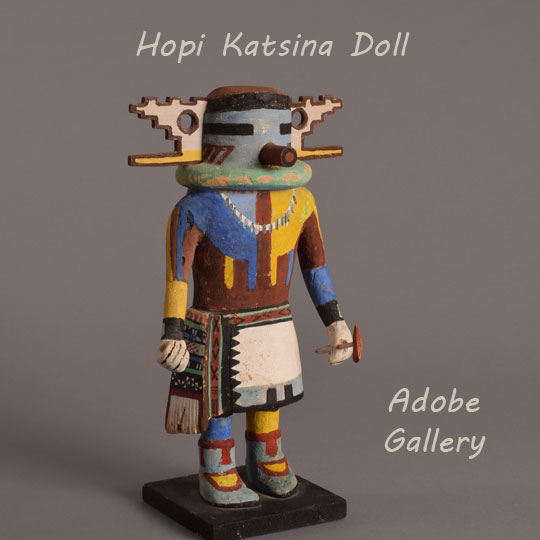 This Pueblo katsina doll has all the attributes of a traditional Hopi carving.  It was carved from cottonwood root, appears to have been carved with a knife, and was painted with traditional matte-finish paints.  On the back of the head, a string was inserted into the head from which to secure feathers.  This is an old traditional Hopi trait.  He has the blue face, red slants on his cheeks, red top of the head, and horizontal black eyes of the A-ha Katsina, who is one of the Chief Katsinas of Second Mesa.

He has the body paint, green ruff, and tubular mouth of a Ma’alo and other Katsinas.  It is then that the identity of the specific katsina is concealed with the addition of the elaborate ears.  There is no Hopi katsina with that style of ears.  It was surely an attempt by the maker to make him look more appealing when exhibited by the Advertising Department, or, possibly a deliberate attempt by the carver to not make an accurate doll that was going to have non-Hopi purposes such as in advertising.  To an uninformed novice collector or tourist, it has all the appeal of an authentic Hopi katsina.

Condition: there is no evidence of any breakage of the doll but there is some paint abrasions and some minor paint touch up on the left shoulder.

Provenance: this Unidentified Hopi Katsina Doll from the Fred Harvey Advertising Department Collection is from the collection of a resident of Washington