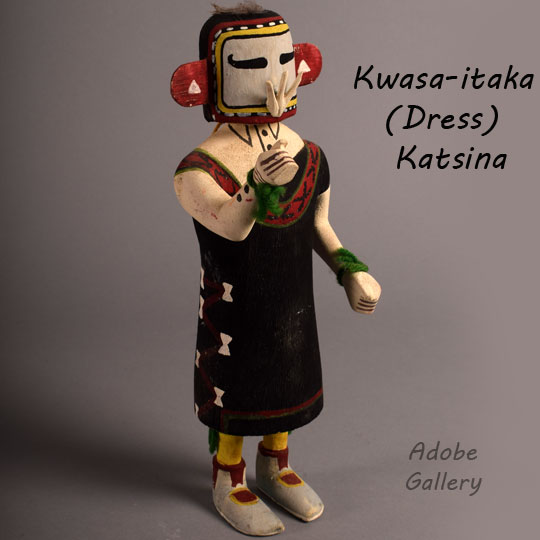 This circa 1940s all-wood katsina doll represents the Hopi Pueblo Kwasa-itaka katsina.  He wears a buttoned-up collar shirt as an indication that he is a male performing as a female katsina.  He is not carrying anything in his hands.

This all-wood katsina doll is the Hopi Pueblo version of the Koroasta of the Zuni people.  He is sometimes called the Dress Katsina because he wears a woman’s dress, without a belt around his waist.  He is also sometimes called the Ota Katsina from the first words of his song.  The most typical feature of this katsina is the three little corn husk packets that make up his nose.  The lines running around his face are to represent the rainbow colors. The belt usually worn around the waist of the dress is worn around the neck in this katsina.  The ends hang down his back.

This katsina has influence over the growth of corn and carries seeds in a bag.  Spectators are eager to receive these seeds and plant them. He is consistently seen in the Third Mesa Powamu.  This katsina used to carry sheep scapulae in his right hand but now carries a Hopi gourd rattle instead. He also carries a digging stick for use in planting the seeds.

Condition: very good condition with some marring of the black paint.

Provenance: this Hopi Pueblo Kwasa-itaka Katsina, Dress Kachina Doll is from the extensive collection of a client from California