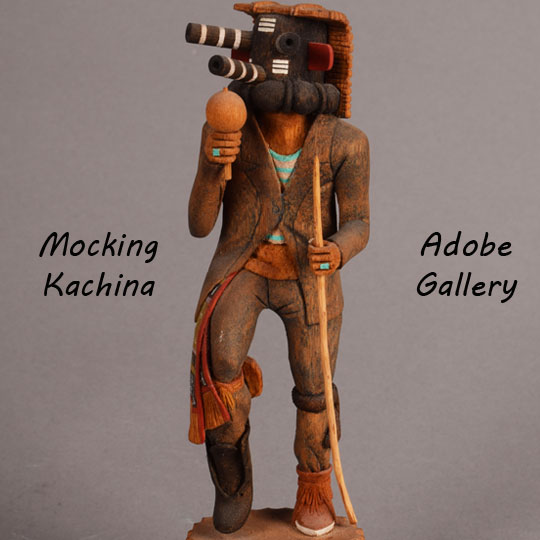 This representation of Kwikwilyaka has been meticulously carved.  He appears dressed in a mixture of Anglo and traditional Hopi attire—turquoise rings, one moccasin and a ceremonial sash are offset by a blazer, pants and one boot.  His decidedly Anglo blazer is set at a juxtaposition, as the words ‘Hopi Power’ are written on the back.  He holds a rattle and a staff.

Kwikwilyaka has striped tubes for his nose and eyes, and a bundle of cedar bark for hair on his head. Many times, when being mocked, Hó-e Katsinas will rid themselves of this irritant by pretending to set its hair on fire.  When Kwikwilyaka mimics this action, he actually sets his own hair on fire.

"Kwikwilyaka is the Mocking Kachina.  As a clown he has little personality of his own but fastens like a leech onto any activity that catches his eye.  With mirror-like accuracy he will reflect every action of the unfortunate whom he decides to mimic.  He drives the other kachinas such as Hó-e to strong measures to rid themselves of this unwanted echo.  Should a person in the audience become the focus of this undesired attention, he must wait until something else diverts the kachina.  But the wait is very difficult without inadvertently making some movement, and the rapidity of the mocking usually produces gales of laughter from the rest of the audience. During the Bean Dance procession, he is a foil for the Hó-e and an annoyance to others." [Wright 1973:37]

Logan Dallas (ca.1900-1990s) of Hopi Pueblo, Arizona, was active from the 1920s to the 1990s carving and painting, and was born before the "Split" at Old Oraibi. He began carving Katsina dolls in the 1920s. Later, he took up oil painting on canvas. His themes mostly were scenes of Katsinam and ceremonies in the village. He influenced younger painters and carvers, including Cliff Bahnimptewa, also from Oraibi. Logan also painted some Katsina dolls using oil paints. He was still actively painting in the 1970s. He spent most of the last years of his life at Moenkopi, living at his daughter's house. He passed away in early 1990s at age 90 or so.

Condition: this Katsina doll is in excellent condition

Provenance: this Hopi Pueblo Kwikwilyaka Katsina, Mocking Kachina Doll by Logan Dallas is from the estate of a New Mexico family