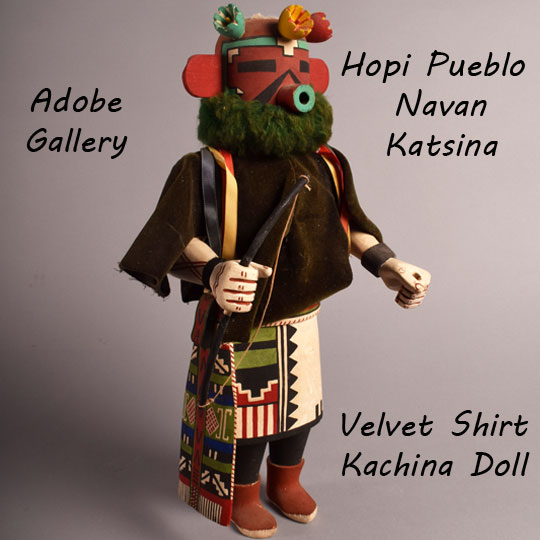 The Hopi name of this katsina is Navan but, because he wears a velvet shirt, he has become known as the Velvet Shirt Kachina.  He is tall, stands erect, and exudes power.  He was carved from cottonwood root and painted with water-based paint.  His velvet shirt is fabric and is draped in colorful ribbons.  With his multiple ribbons and flowers on his head, he is very colorful and majestic.

It is believed that the Navan Katsina originated at the Village of Moencopi on Third Mesa sometime after 1900. He represents the blooming of plant life and the beauty of life, as illustrated by the flowers on his head. His songs are prayers for rain to sustain life.  He appears in regular katsina dances as well as in Kiva Dances.

Condition: very good condition, except he is missing the rattle from his left hand.  Feathers have been removed in accordance with federal regulations.

Provenance: this Hopi Pueblo Navan Katsina, Velvet Shirt Kachina Doll is from the collection of a gentleman from California