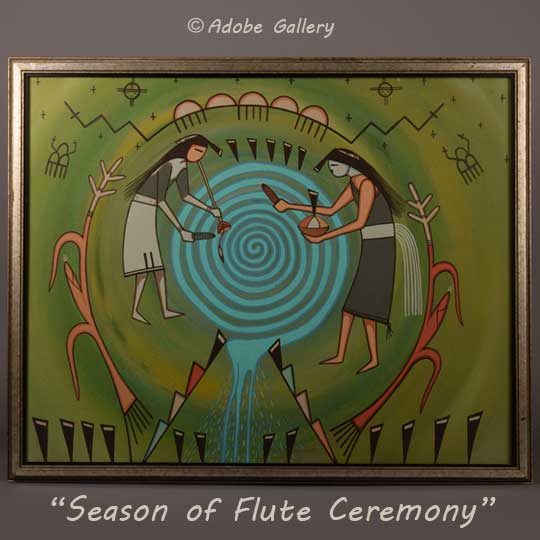 "Season of Flute Ceremony" is an original painting by Hopi artist Milland Lomakema. It was completed in 1977. The titular flute ceremony is being performed by two people. Each figure holds an ear of corn in their right hand. One holds a basket full of cornmeal in her left hand, and the other plays a long flute, which is decorated with rain cloud designs. They are turned inward toward a large blue spiral, which occupies the center of the image.

A variety of additional design elements appear, mostly falling into the circular pattern established by the central spiral. Tall corn stalks curve upward below and behind the figures. Up above, a storm pattern brings water to the ceremony. Further into the upper corners, additional storm patterns and a pair of suns appear. The beautiful green and yellow background also swirls into a circle, linking each element together into an appealing whole.

The painting is signed Dawakema and dated 77 below the left figure's feet. It is framed under glass in a carved wood frame.

Milland Lomakema (1941-2021) Dawakema was a member of the Artist Hopid, a group organized in 1973 by Hopi artists Michael Kabotie, Terrance Talaswaima, and Neil David, Sr. The objectives of the group were to use Hopi art to instill pride and identity, to educate the world to the aesthetic and cultural values of the Hopi, to develop new ideas in Hopi art, to control the aesthetic for Hopi art, and to document Hopi history through the visual arts. Lomakema was a self-taught artist with no formal training in the arts, although he attended several schools over the years. In the late 1950s, he traveled with an education tour group throughout the east coast of the United States and Canada. In the mid-1960s, he worked with a detective agency in Phoenix, then he joined the Hopi police force in 1968, during which time he devoted most of his spare time to painting. He won first place in the Heard Museum's National Indian Art Show in 1968 for one of his paintings. Then in 1969, he won additional prizes for his art and more prizes in 1970 and later.

Provenance: this Dawakema Original Painting titled "Season of Flute Ceremony" is from a private collection

Reference: Hopi Painting: the World of the Hopis by Patricia Janis Broder

The Fourth World of the Hopis: The Epic Story of the Hopi Indians as Preserved in Their Legends and Traditions (SOLD)
by Harold Courlander