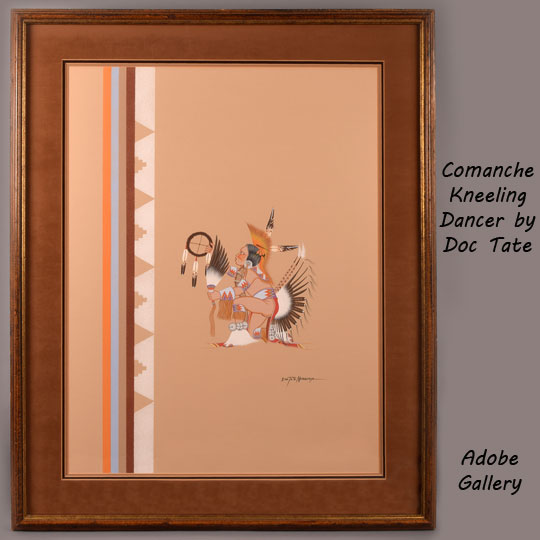 This large watercolor painting was made by Comanche artist Doc Tate Nevaquaya.  Here, Nevaquaya created a slightly different variation of the works we’ve seen in the past.  The deep, elaborate background is gone.  Instead, he left most of the paper untouched by paint, and added a series of vertical lines in orange, blue, brown and white.  A single kneeling dancer is positioned near the center of the large piece.  With his abundance of depth, detail, and color, this dancer is an outstanding example of a slightly more modern take on the traditional style.  Placing this detailed dancer within the broad expanse of the tan paper and adding nothing more than the vertical element was an unusual choice, but it works well.  This is a unique and beautiful piece from a skilled Comanche painter.

We have not handled many works by this artist, but the few we’ve had suggest that he was a skilled and versatile painter.  His works often feature human figures that are clearly inspired by traditional Plains paintings.  They’re placed within settings that are unusually elaborate, at least in comparison to earlier traditional works, which would feature little or nothing in the way of setting.  The painting is signed Doc Tate Nevaquaya in lower right.  It is framed in a carved wood frame, under a brown mat with interior bands in black and gray.

A descendant of the artist informed us that the painting is titled "Little Eagle Boy Dancer."

Doc Tate Nevaquaya (1932 - 1996) was a Comanche painter and musician.  He was given the name Joyce Lee Tate Nevaquaya when he was born in 1932 at Apache, Oklahoma.  He had been delivered by a physician named Dr. Joyce, and the family honored the doctor by using Joyce for their son’s first name.  He was nicknamed Doc, most likely because of his relationship to the physician. He was always known as Doc Tate. He was orphaned at age 13 and went to live with his grandparents, thus strengthening his relationship with his Comanche heritage. As an adult, he was a man of many talents—teacher, minister, lecturer, historian, dancer, composer, singer, flautist, and painter. His interest in the courting flute—a traditional instrument that is played by many American Indian tribes during courtship and fertility rituals—began in childhood and eventually became his primary creative interest.  Doc Tate became an accomplished flautist, instructor, and lecturer and was one of the leaders in a 1970s revival of the courting flute. Later in life, he released two recordings of his courting flute compositions.

Provenance: this Painting of Comanche Kneeling Dancer by Doc Tate is from a private Colorado collection Spirits in the Art: From the Plains and Southwest Indian Cultures [SOLD]
by James A. Hanson