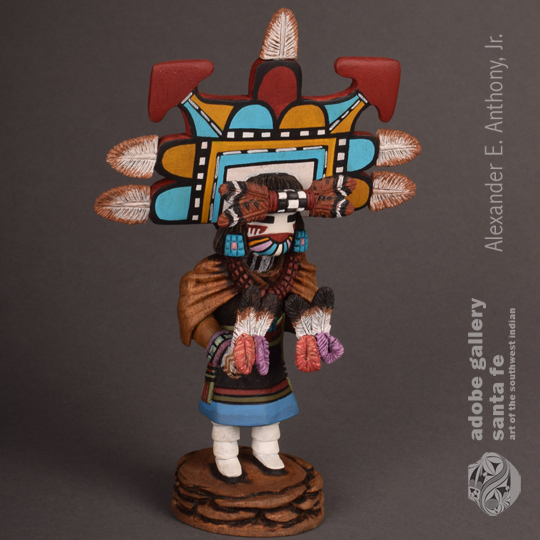 Hopi Pueblo artist Julius Pochoema has carved this example of The Palhikmana; one of the more spectacular Hopi Katsinas because of the large and elaborate tableta on her head, as well as the rainbow decorations on her chin. She is a maiden with several functions. She may appear in a katsinam function as a Corn Grinding Maiden, or as a Salako Mana in a dance with the Salako Takas, or as a non-katsina in the women's social dances.

Barton Wright places this katsina in the Night Dances group, which, as he explains, are the dances held in the kivas in January before the arrival of the katsinas to Bean Dance in February. He states that at Third Mesa, puppet dances in the kiva feature the Salako and Palhikmana with the Water Serpent, but this is not done at First or Second Mesas. In these puppet dances, the Palhikmana is the maiden who grinds corn.

The carver of this doll is the son of Kevin Pochoema so it is no surprise that the workmanship is exceptional. The body proportions are well illustrated, and the painting of the clothing is as fine as one could expect. The tableta is beautifully designed and painted. Overall, the doll is well above average. It is very impressive.