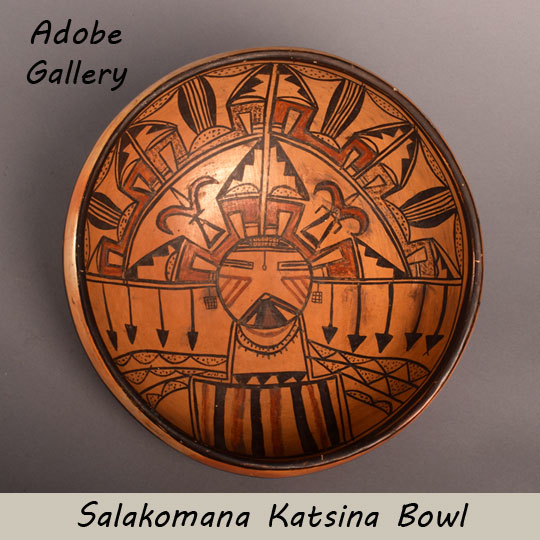 This large Hopi bowl was certainly made with much intention.  It was overtly decorated inside and out on a cream slip that was applied as the base layer.  Externally, a band of repeating dark brown geometrics in the forms of half circles and triangles is spotted with red, reminding one of rain clouds and directional winds. The lip is rimmed in dark brown followed by another continuous band just inside the bowl's edge.  While typically this band may be a spirit line, broken to signify not encasing the artist's talent or life force within the vessel— this unbroken line may purposefully be used to contain the bountiful and necessary force of its titular motif.

Namely, this bowl depicts Salakomana. Salakomana is recognizable by the terraced symbols of clouds and lightning in her headdress, as she brings life-giving rain to the Arizona desert land of the Hopi people. A corn symbol across her forehead refers to productive crops and harvests.  This bowl appears very much to be a prayer, incarnate, and in the form of a painstakingly decorated bowl, to the forces that underlie the very lifeblood of the Hopi people’s existence.

The Salakomana is represented in infinite forms, decorating pottery and as a katsina doll, over and over.  In this case she explodes with power and intricacy from the bowl’s internal center.  Feathered antenna quake from her crown, and wings of dropping arrows reach outward in a prayer for abundance and water falling from the sky.  Her headdress, too, appears to be infinite— beginning at her crown and reaching in repeating geometric sections to the far reaches of the bowl.  Arrowed wings become rain speckled shapes, moving ever downward. All rest on Salakomana’s very strong base, alternating red and brown pillars grounding the image and its intent to the earth.

While no signature is included, the patterns and clay make this bowl undoubtedly Hopi.  What stands out about it—its large size and sweeping, intricate designs—leaves one to wonder much about its maker.  For she must have embodied a great life force and an outward expression to match, to create such a bold and sacred vessel.  Because of its wear pattern, it is dated to the first half of the 20th century.

“Kachinas have lives that are the same as any other Hopi, and consequently most of them have mothers, wives, and sisters who accompany them when they are seen in ceremonies and dances.  These female kachinas are impersonated by men with one exception, the Pachavuin Mana.  In this one instance the impersonator is a woman. . . . The men who take the impersonation of the kachina women in ceremonies do so by personal choice or the general accord of their kiva mates.  The decision is often based on the men’s small size or simply because they do an excellent job of impersonation.  Three is never any onus attached to the role.”  [Wright, 1977:52]

There are variations in published documents about the spelling and appearance of this katsina’s name.  Some older documents present the name as Salako Mana, some newer ones combine the two as Salakomana, but the surprising discovery is that Hopi artist Alph Secakuku spells the name Salakmana, dropping the “o” in the name.  The Salakomana’s male companion is the Salakotaka.

Condition: Overall, this bowl is in good condition, with some wear to its base.

Provenance: this Large Hopi Pueblo Salakomana Katsina Open Faced Polychrome Bowl is from a private collection of a resident of Albuquerque