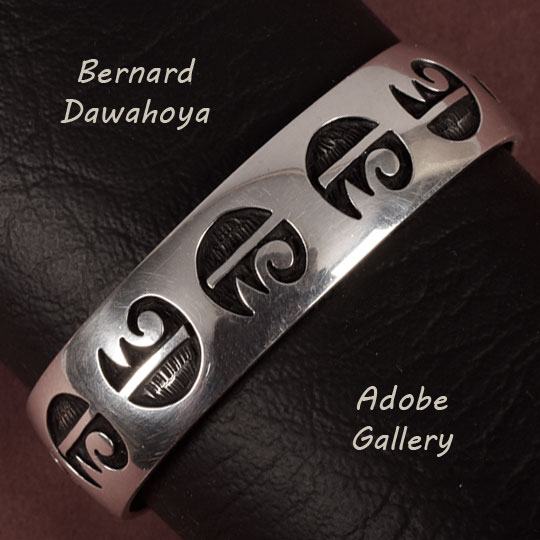 This Hopi Pueblo silver overlay bracelet by Bernard Dawahoya is extraordinary in several ways.  The band is arched, not flat, the cutout designs across the band alternate in orientation, and the finish is polished rather than matte.  The artist's signature stamp of a “snow cloud” appears twice on the interior—once at each end of the bracelet.

Bernard Dawahoya (1935-2010) Masqueva, Little Sun was from the Hopi village of Shungopavi on Second Mesa.  He was a versatile artist in silver work, textiles, paintings, katsina dolls, and leather work.

“Bernard Dawahoya learned to make jewelry from his uncles, Washington Talayumptewa & Sidney Sekakuku.  Bernard recalled, ‘I was about 15-years-old, when I was working at my Uncle Sidney Sekakuku’s sheep camp.  I was playing with their tools, when they caught me one day.  This was the beginning of my jewelry making’.  Bernard also took classes at the Hopi Silvercraft Cooperative Guild.  He and Eldon James worked for Wayne and Emory Sekaquaptewa, making jewelry at their Hopi Enterprise shop in Phoenix.  In 1960, he worked in Kykotsmovi at their Hopicrafts Shop.  Their display room was re-located in 1971 at the Cultural Center.  Bernard eventually re-settled in Shungopavi, creating his own shop, while exhibiting at arts and crafts shows.” [Schaaf, 2003:132]

“. . . Dawahoya . . . is considered one of the most prominent silversmiths of his generation.  He used heavier gauge silver than most overlay artists, and his designs were bold and elegant; his cuts were crisp and precise.” [Messier, 2014:128]

Provenance: this Hopi Pueblo Sterling Silver Overlay Bracelet by Bernard Dawahoya is from a resident of Colorado