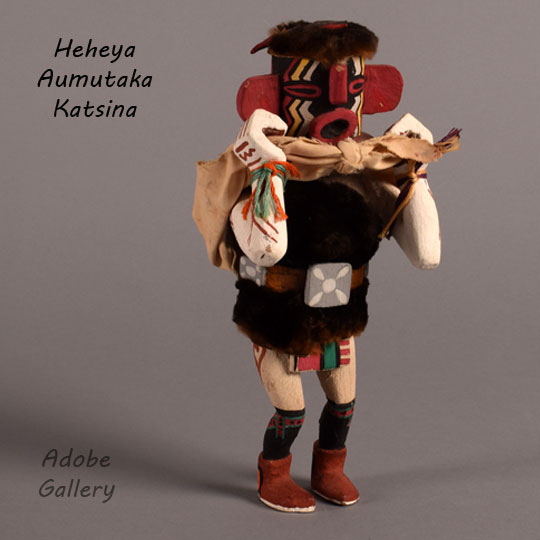 This representation of the Hopi Third Mesa Heheya Aumutaka was carved from cottonwood root, and dressed in a fake fur body wrap, colorful threads on both wrists, and carved wood feathers on his head.  His face is painted with lightning-like lines in red, yellow, and blue.  He carries a cloth in which is a rectangular object, probably filled with gifts for the children.

Heheya Aumutaka is only seen at Third Mesa, and his name translates to “like Heheya”.  He formerly accompanied the Soyoko when they appeared on Third Mesa but since the Soyoko no longer come, his role has shifted to that of a general Powamu Katsina.

“The Powamu is one of the most important of the Hopi ceremonies.  It occurs in February of each year in most of the Hopi villages.  In actuality it is not a single ceremony but a cluster of several important events that are interwoven.  Most years the ceremony is presented in an abbreviated form.  However, in the years when the tribal initiation of the young men is held, the Pachavu Ceremony will be attached to the Powamu, and the ceremony is presented in its full, unabridged form.” [Wright, 1973:17]

Provenance: this Hopi Pueblo Third Mesa Heheya Aumutaka Katsina Doll is from the collection of a gentleman from California