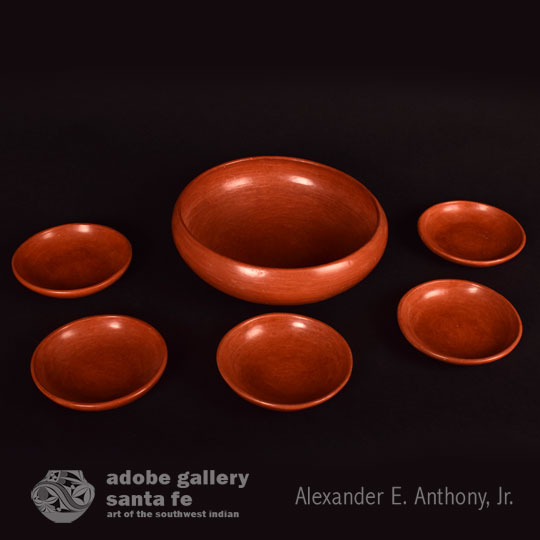 This pottery salad bowl set was made by one of Adobe Gallery's favorite Hopi-Tewa potters, Garnet Pavatea. Garnet started this set by making a traditional piki bowl-a bowl in which to hold liquid blue corn destined to be spread over a hot stone for making piki bread. To the bowl, she added five small shallow bowls. The grouping then became a salad bowl set. It is fascinating to see a potter take tradition and adapt it to today's modern use. 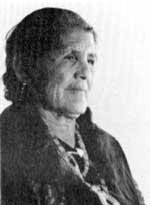 Garnet Pavatea (1915-1981) was a lovely lady and a most friendly one. It was a pleasure to visit with her in her home atop First Mesa. Late in her life, she lost both of her lower legs to the effects of diabetes and was unable to be as productive as earlier, but she did still make pottery with the assistance of friends and family members.

This salad bowl with five small salad plates appears to be an early creation by Garnet Pavatea, perhaps as early as the 1970s, but that cannot be determined as none of them is dated. The set was slipped in red, stone polished, and left without decoration of any kind. It was fired in an outdoor process. Each of the six pieces is signed with her full name.

Condition:  very good condition with some loss of red slip on bottom of large bowl

Provenance: this Hopi-Tewa Red Pottery Serving Bowl and Five Small Bowls by Garnet Pavatea is from the estate of a Santa Fe family formerly of Arizona