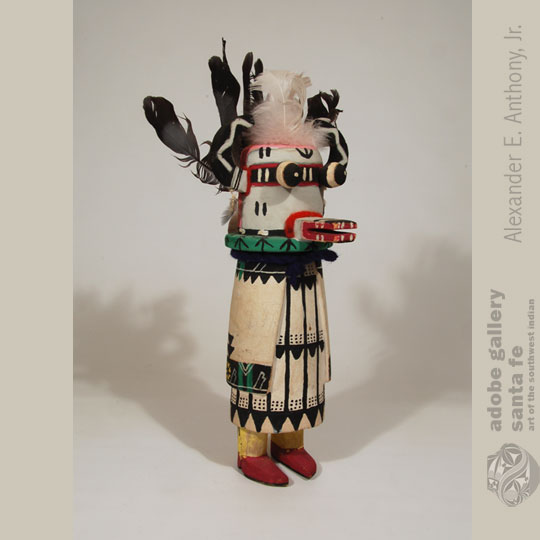 “The Sio Salako is a Hopi interpretation of the Shalako Ceremony of Zuni and thus receives the name Sio (Zuni).  Sio Salako is portrayed like neither the Zuni nor the Hopi Salako but is instead a separate entity. He was introduced to the Hopis by a Tewa man around 1850 and first appeared as a group of four kachinas.  Since that time changes in ceremonial have reduced the number to one and added Salako Mana that formerly did not appear.

“He appears in late spring on very rare occasions and is thought to be especially efficacious in bringing rain.  A view of this nine-foot kachina is a rare sight indeed.” Wright 1973

The basic difference in costume of the Zuni Shalako Katsina and the Hopi Sio Salako Katsina is in body dress.  Zuni Shalako are clothed in a white manta below the embroidered shoulder wrap. The Sio Salako at Hopi retains the Hopi style of feathers covering the body.  The shoulder wrap is the same style as that at Zuni. The difference between the male and female version of the Sio Salako is that the male wears traditional moccasins and the female wears the white doe skin moccasins with leg wraps.

This carving appears to be painted with white kaolin on the body, blue pigment on the face, and highlighted with commercial and vegetal paints.  The yellow on the legs appears to have been repainted on the back side.

Condition: this Hopi Sio Salako Katsina Doll, circa 1950 is in very good condition with minor repairs—both horns have been snapped off and glued and the left foot appears to have broken off at the front and has been glued back in place.

Provenance: from the extensive collection of katsina dolls by an Oklahoma family. 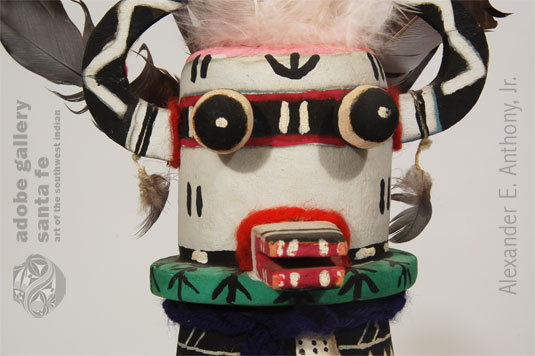