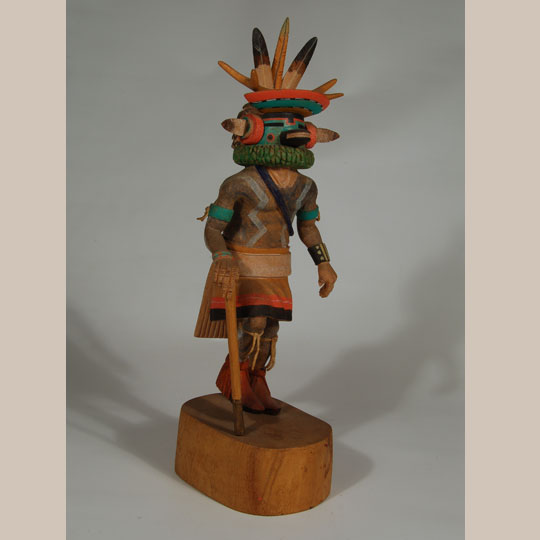 The Deer Katsina is one of the very popular Plaza Dance participants. Usually when he appears, a Wolf or Mountain Lion Katsina, as a side dancer, accompanies him. The Deer Katsina has power over rain, and, when he dances, it is a prayer for increase of deer.

Presumably the first Deer Katsinas were brought from the village of Awatovi, which may be correct as they retain a strong Rio Grande appearance.  When dancing, the Katsina bends forward at the waist and rests the front part of the body on the short stick that is carried.  The stick acts as the front legs of the deer.

This Katsina was carved by Silas Roy, Sr. (1948- ).  Silas is of the Coyote Clan and has been actively carving Katsina dolls since 1963. He is from Third Mesa on the Hopi Reservation, living alternately at the villages of Moencopi and Hotevilla. He has won many awards from the Heard Museum, Museum of Northern Arizona, Scottsdale Nationals, and Tanner Indian Arts show.

Condition:  The doll is in original condition except the thumb on the left hand is broken off, however, it is not noticeable unless one rotates the doll to a position where the hand could be examined.  The signature on the underside of the base is practically worn off but the name of the carver is still discernable.