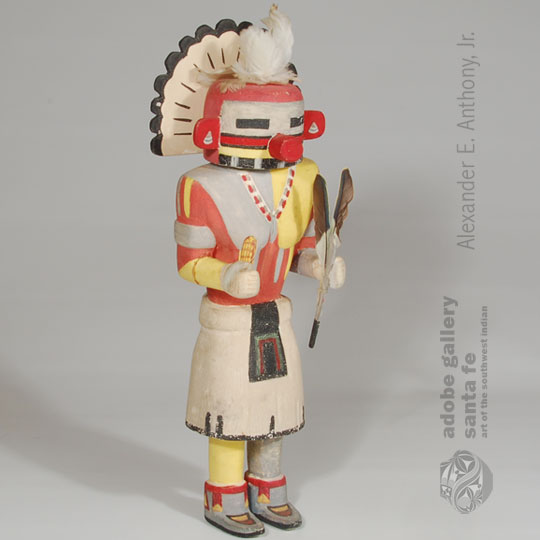 We had difficulty identifying this katsina doll when it first arrived, so we sent a photo to a friend on whom we rely when we have questions on katsinas or katsina dolls.  He identified it as a Soyaitaqa Katsina, for which we were thankful.  We then undertook a search through all the Hopi katsina books but could not find any listing for such a katsina, so back to our friend and he then referred us to a reference from Bahti Indian Arts.  Thanks to our friend and to Mark Bahti for this assistance.

The katsina is spelled Soyaitaqa or Sooya’ytaqa and defined as “Planting Stick Boy.”  According to Mark Bahti, he has also been called a Laguna Gambler, but the origin of that misnomer is unknown.  Bahti says another name given him is Koyung Taqa or Turkey Boy because of the fan of turkey feathers behind his head.

The katsina is one of the many Corn katsinas.  There are several varieties of the Corn katsina, which is understandable as the Hopi grow several types of corn—red, yellow, white and blue.  Bahti states that Corn katsinas represent the spirit of the corn plant, which provides life for the Hopi.  The planting stick is used to penetrate the earth when planting seeds.

This carving was well executed with good body proportions and scale.  In his left hand he carries a planting stick adorned with two feathers.  In his right hand, he carries an ear of yellow corn, also adorned with a feather. The fan of feathers behind his head represent a fan of turkey feathers.  There was an attachment on the back of this structure, but it is no longer attached.

Condition: the right arm has been broken at the elbow and glued. There is no other damage or repair noted.

Provenance: this Hopi Soyaitaqa - Planting Stick Boy - Katsina Doll is from the collection of a family from Santa Fe 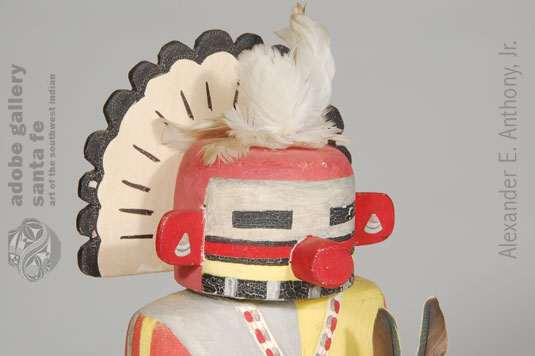