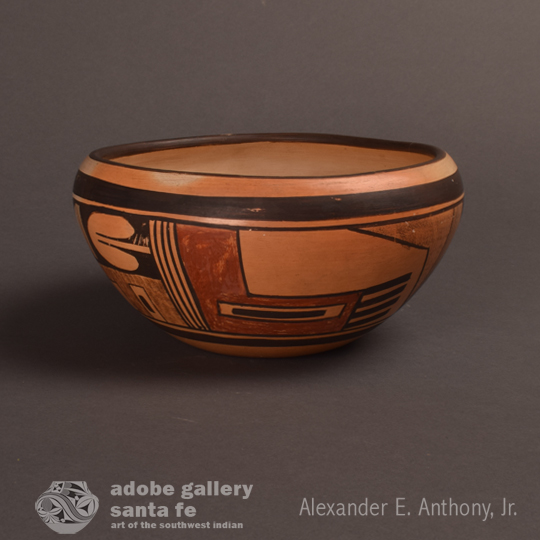 The design is divided into four panels separated by a series of parallel vertical lines. The framing line at the neck and the one at the underbody do not have ceremonial line breaks. The bowl is signed with Paqua's hallmark frog symbol.

Paqua Naha (1890-1955) was the original Frog Woman and the mother of Joy Navasie, who became the second Frog Woman. She was an excellent potter and taught her daughter the processes of pottery making as early as 1935. Frog Woman originally produced pottery in the traditional Hopi-Tewa style with a warm orange glow. Not too many years before she passed away, she developed a process for making pottery with very white coloration, something her descendants have continued doing.

Condition: The Hopi-Tewa Polychrome Bowl by Paqua Naha is in very good condition with only minor rubbing of the paint: nothing unusual for a vessel of this age.

Provenance: Previously from a Colorado collector from whom we acquired it in 2006 and sold to a client from whom we now have it back to sell.