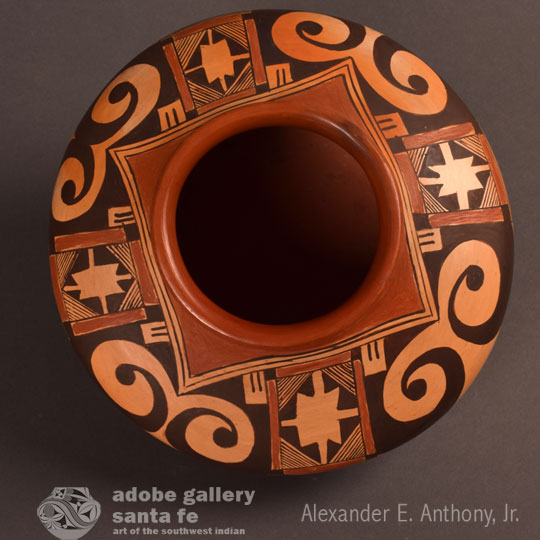 Hopi Pueblo artist Garnet Pavatea recreated this revival Sikyatki design that has served the Hopi-Tewa potters well for the last hundred years. It has been referred to as the Eagle Tail design and has been interpreted by many of the potters. Often the square box, which contains a star design in this jar, is constantly changed to the whims of the potter.

Often, as in this jar, the rim and neck are orange and arranged in a square shape from which four Eagle Tail devices are suspended.  The majority of the design is on the shoulder of the jar but the tail feathers extend from the midpoint down to near the base of the jar.  This jar by Garnet Pavatea (1915-1981) was made in the 1960s at a time when Garnet was able to collect her clay, fashion the pottery, paint it and fire in an outdoor firing.  Late in her career, she had both feet amputated and then had to rely on a commercial electric kiln for firing.

Garnet Pavatea was known as Flower Girl and she was a Hopi-Tewa from the Tewa Village on First Mesa.  Her dad, Dewakuku, was Hopi and her mother was Tewa. Following tradition, Garnet was of her mother's clan.

Hopi artisans owe much to Mary-Russell Ferrell Colton, co-founder of the Museum of Northern Arizona in Flagstaff.  She was instrumental in creating the Hopi Craftsman Exhibition in the early 1930s with the intent of fostering production of quality work.  She was concerned that traders were content to accept and sell mediocre work from Hopi craftsmen and were not interested in educating the public on quality crafts.  She organized the craft exhibit for the July 4th weekend every year and it has served her intent to greatly increase interest in quality Hopi crafts.

Garnet Pavatea was a long-time entrant in the craft exhibit and won many awards by doing so.  She also seemed to be a favorite of the Museum of Northern Arizona. She was often a demonstrator at the Craftsman Exhibition.  For many years, Adobe Gallery had a standing order from the Museum of Northern Arizona for any Garnet Pavatea pottery available.

This seed jar of the Sikyatki-shape is a shining example of her expert craftsmanship in vessel construction and her artistic talent in designing and painting a jar. She extended the red paint on the rim down into the interior of the jar, a step not necessary, but one that demonstrates her attention to detail.  The jar was constructed from all native materials and fired in a traditional outdoor firing. It is signed Garnet Pavatea on the underside.

There is a most interesting polished red bowl with five small bowls shown below as a related item.  The salad set was made by Garnet as well.