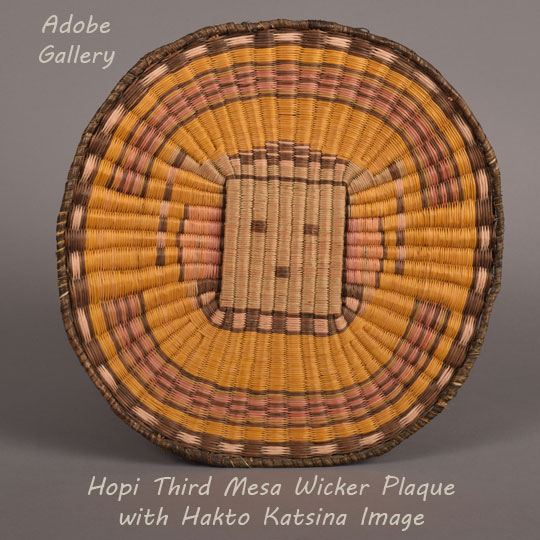 This wicker plaque by a Third Mesa Hopi unknown basket maker displays the face of Hakto Katsina.  His face is green, he has black eyes, and a black mouth.  Around his neck is a black and white ruff.  Atop his head rests a wooden bar with feathers and horsehair suspended from its ends.  The background color of the plaque is yellow, and there are two semicircles of colored stitching.  Rows of black and white encircle the outer edge, which is wrapped in strips of yucca that were dyed black.

“Hakto is a kachina that was introduced from the Zuni sometime in the last 100 years.  In Zuni he is known as Yamuhakto and he always accompanies the Shalako; among the Hopis he appears only with the Sio Salako and has had his name abbreviated to Hakto.  The Zuni name refers to ‘carrying wood on his head.’” (Wright, 1973:130)

Condition: good condition with some fading of colors

Provenance: this Hopi Third Mesa Wicker Plaque with Hakto Katsina Image is from the large collection of a gentleman from California