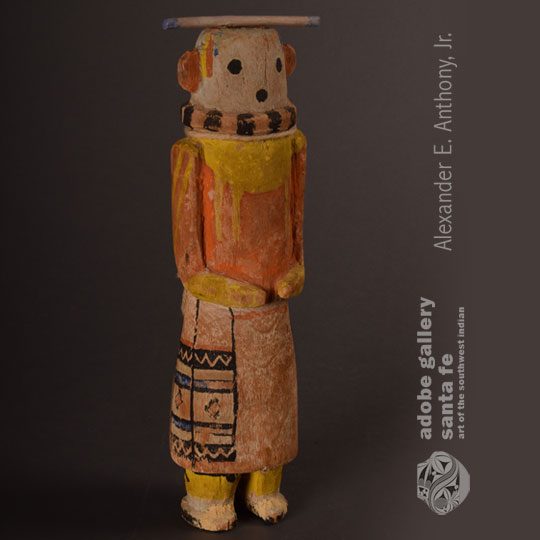 This Hopi Hakto Katsina doll appears to be from the early twentieth century, probably 1920s or 1930s.  It is typical of those of that period—hands tucked to stomach, arms pressed against torso, and long kilt with short legs.  It is in excellent condition with expected wear and abrasions to painted surfaces.

This marvelous little carving was constructed from a single cottonwood root with the probable addition of the pair of red ears and the stick on the head.  There is something about the simple face of Hakto that makes one think of an innocent youngster. A look at the face makes one smile. The doll has a string around its neck to facilitate hanging on a wall.  It will stand unaided as well.

Katsina dolls of this age are very difficult to find on the market today as most are in private or commercial collection.

Condition: this Hopi Pueblo Early Twentieth Century Hakto Katsina Doll is in very good condition.  It is possible that the stick on his head has been replaced.

Provenance: sent to us from a resident of Switzerland who had purchased it in Santa Fe in the 1970s