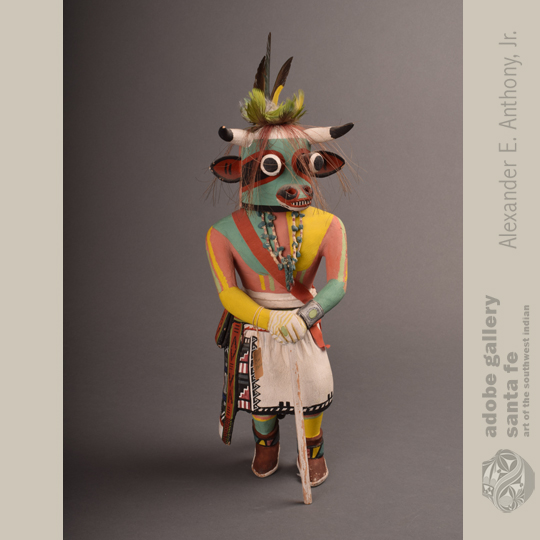 The Wakas is the Cow Katsina. He seems to have first appeared in the Hopi pantheon of katsinas around 1900 and has appeared regularly since then. He represents an animal spirit messenger to the rain gods. The songs and dance movements are prayers for rain and are symbolic of animals' self-sacrifice in supplying food to sustain life. – Secakuku

Most of the carving is wood.  The exceptions are the red bandana crossing his chest, which is fabric; the necklace made from commercial string; the hair over his face appears to be horse hair; and the feathers are from a variety of birds.  The rod which he is holding in his hands represents the front legs of the cow and is used during the dance as the katsina leans over the rod.

The Fred Harvey Company was the owner of the Harvey House chain of restaurants, hotels, gift shops and other hospitality industry businesses alongside railroads in the western United States. It was founded in 1876 by Fred Harvey to cater to the growing number of train passengers. When Harvey died in 1901, his family inherited 45 restaurants and 20 dining cars in 12 states.

For the Southwest, Harvey hired architects Charles Whittlesey and designer Mary Colter for influential landmark hotels in Santa Fe and Gallup, New Mexico. The Grand Canyon was the Santa Fe's main tourist destination and a major activity of the Harvey Company. Colter's rugged, landscape-integrated, and culturally appropriate design principles there influenced a generation of subsequent Western U.S. architecture through the National Park Service and Civilian Conservation Corps structures built during the Great Depression and after.

The Harvey Company filled its gift shops at its hotels with fine Native American arts and crafts items, handmade by artisans of the Southwest.  The company placed Fred Harvey price tags on items and, if from Hopi artisans, tags stating From the Hopi Villages. After decades, however, most tags have been removed from items or lost to posterity.  This Cow Katsina proudly displays both tags hanging from a string on his arm. Additionally, there is a paper tag attached to the black pedestal from Richard Norton, Inc., Chicago, ILL.

It is therefore known that the doll was sold from a Fred Harvey facility, possibly from the Grand Canyon.  The artisans name is not attached to the tags and, if it is noted on the underside of the foot, it can only be accessed by removing the doll from the pedestal, which we have chosen not to do.

Condition: this Hopi Wakas - Cow Katsina Doll with Fred Harvey Tag is in very good condition with a crack in the wood of back left shoulder and minor paint loss or abrasion.

Provenance: from the estate of Santa Fe dealer and collector, Martha (Marti) Struever who passed away in August 2017.