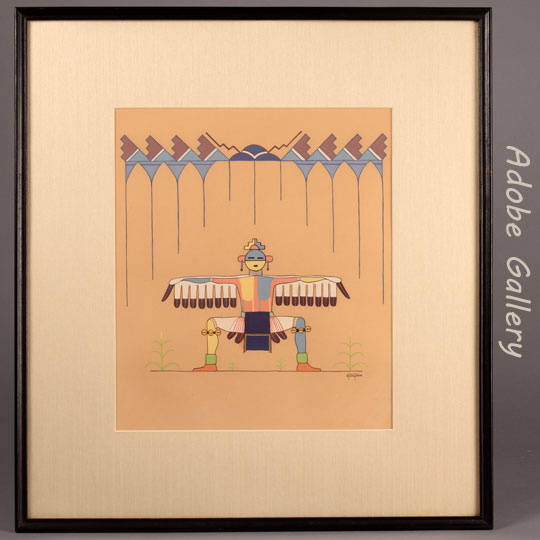 This original painting by Hopi artist James R. Humatewa Jr. is titled “Thunderbird”.  It dates to the 1930s or 1940s, and it provides yet another example of the incredible skill and creativity of the early Hopi painters.  In this image, Humatewa’s colorful Thunderbird stands beneath a stylish storm design.  The image varies greatly from the Hopi paintings of its day, and it does so successfully.

Humatewa’s Thunderbird faces the viewer directly.  Its wings are outstretched, and its legs are spread, with knees bent into right angles.  It is an appropriately strong and dramatic pose for the Thunderbird, which is a traditional symbol of power, protection, and strength.  Humatewa softened the image with his lovely color palette, using warm yellow, aquatic blue, lime green and salmon tones to compose his Thunderbird.  Like the composition itself, these colors are atypical for the time, and they work wonderfully.  The stylish storm design up above uses tilted kiva steps, storm clouds, and inverted triangular forms, bringing rain to the ceremony and the thirsty plants down below.  Each of these elements and colors complements the others perfectly, creating a well-balanced image with a lively energy.

The painting is signed Humatewa in lower right.  It is framed beautifully, using archival matting and backing materials while retaining the original 1930s frame.

James R. Humatewa Jr. (1926-1976) Shelling Corn was a Hopi painter.  He was born near Tuba City, Arizona, and later lived and worked in Santa Fe and Bernalillo.  He both worked for and exhibited at the Museum of New Mexico and placed his works in many other prominent collections.  He is reported to have been one of the most prolific young Hopi painters during the 1950s.  He exhibited widely and is included in most of the major texts regarding early Native painting.

Provenance: this James Humatewa Original Hopi Pueblo Painting titled "Thunderbird" is from the collection of a client from Chicago