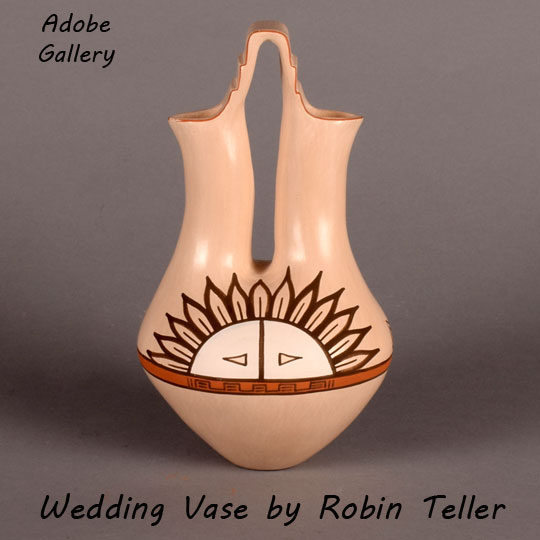 This very elegant and sculptural wedding vase was made by Robin Teller of Isleta Pueblo. It is approximately 20 years old.  The bulbous body was divided at about mid-section by a thin band of orange pigment, outlined in brown pigment.  Within the band is a stepped design.  Above this orange pigment band, the artist painted a half-face image of a sun deity, with triangular eyes on a white face, and a fan of feathers surrounding the face.

On the opposite side of the wedding vase is a design of rain clouds enclosing a pair of triangular maze designs.  The arch between the two spouts were beautifully carved with stepped elements, and the arch and spouts were outlined with a thin orange line.

Isleta Pueblo’s Robin Teller (1954 - ) is the daughter of Stella Teller, an artist with a long career of making pottery figurines in her studio at Isleta Pueblo. Stella follows a family tradition of potters as her great-grandmother, Marcellina Jojola, her grandmother, Emeklia Lente Carpio, and her mother, Felicita Jojola, were all pottery makers. Stella Teller began working in clay at the age of eight, helping her mother slip and polish small pots. Robin Teller has been making pottery since 1988, including nacimientos, storytellers, polychrome jars, and bowls.

Steller Teller’s daughters have followed in the footsteps of their mom.  Chris (b.1956), Lynette (b.1963), and Mona (b.1960) are all exceptional potters.  They have the same style and pigments used by Stella.  They mostly make storyteller figurines and nacimientos, and occasionally a vessel shape.

Condition: very good condition with a small abrasion on the orange outline at one spout.

Provenance: this Isleta Pueblo Polychrome Wedding Vase by Robin Teller is from the collection of a family from California