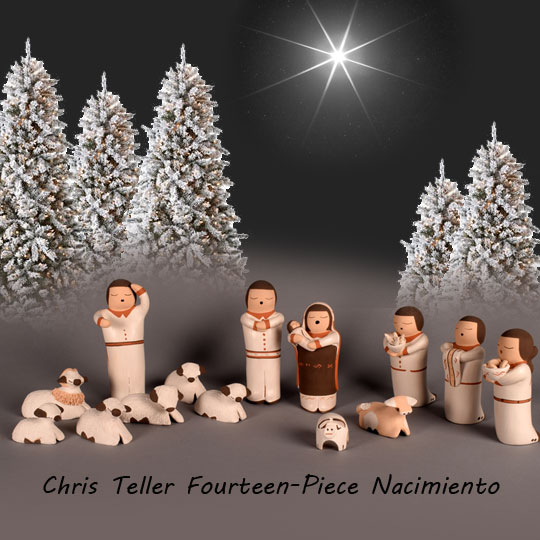 This nacimiento by Chris Teller includes the Virgin Mary holding baby Jesus, Joseph, three Wise Men offering gifts, a shepherd, six sheep, a cow, and a pig.  On the human figures, four main colors have been used as a slip.  The white has been stone polished while the browns and peach are in matte form.

Mary and Joseph have their eyes closed and arms drawn together, with Baby Jesus resting, eyes closed in his mother’s arms.  Three men offering gifts, potentially seen as three kings, are the only kneeling figures and with eyes closed, mouths open, offer gifts of a blanket, corn, and bread.  The shepherd stands as the tallest figure, arms extended, eyes closed, and mouth open, caring for four ewes, one ram, and one lamb.  The cow and sheep are lying down while the pig stands.

Chris Teller, “Pe-ou” Misty, of the Tiwa Isleta Pueblo, was born in 1956. She began working with clay at the age of 17. Chris was inspired by her mother, the renowned potter and artist Stella Teller, to carry on the tradition of making clay sculptures.

Chris’ specialties include nacimientos, storytellers, and clay sculptures. She hand-coils friendship pots, traditional pottery, and wedding vases, using age-old methods passed down, in this case, from mother to daughter. This includes gathering and processing clay from within Isleta Pueblo and firing the pottery outdoors. Chris signs her pottery as: C. Teller, Isleta, N.M., as is the case with this nacimiento, on the bottom of each human figure.

Condition: There has been some light abrasion to the slip over time. Part of one king's belt has been rubbed, alongside a few of the shepherd's buttons. A very small amount of the dark brown slip on the Joseph figurine has been affected as well. Overall, this nacimiento is in good condition.

Provenance: this Chris Teller Isleta Pueblo Fourteen-Piece Nacimiento is from the collection of a family from California