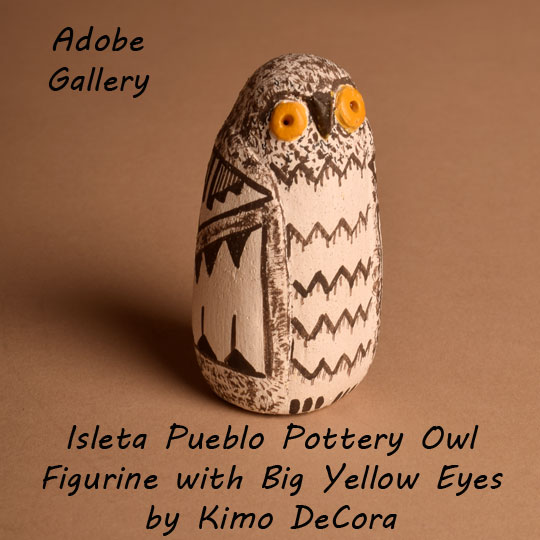 This fine small Isleta Pueblo pottery owl figurine by Kimo DeCora is cylindrical in shape and painted in brown pigment on a cream slip.  The back of the figurine was beautifully hand coiled and painted in a blanket pattern which appears to be wrapped around the owl.  His zigzag body feathers are in the form of rain.  His big beautiful eyes are orange.

Kimo DeCora is an award-winning potter from Isleta Pueblo, New Mexico. His heritage is half Isleta and half Winnebago. He specializes in miniature pottery. He is basically a self-taught potter who was influenced by Isleta Pueblo pottery artists Cipriano Romero Medina and John Montoya.  Kimo DeCora is one of the few potters at Isleta making traditional pottery just like his ancestors have done for a millennia.

Provenance: from the collection of a family from New Jersey

Recommended Reading: THE STORY OF PUEBLO POTTERY by By H. M. Wormington