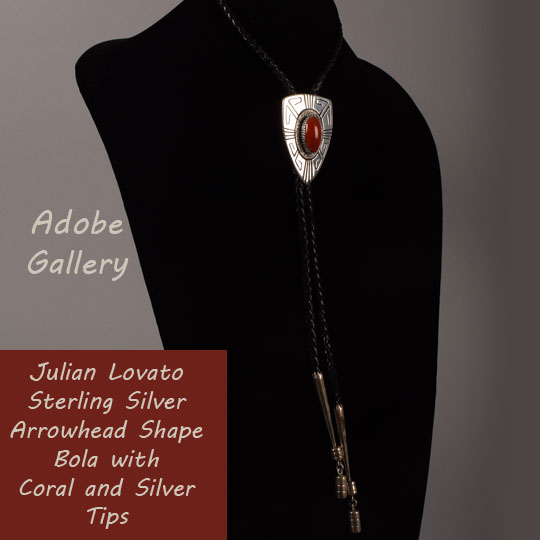 This coral and silver bolo, made by Julian Lovato of Kewa Pueblo, contains a beautifully rich red coral cab, set in a silver bezel, and floated on a silver pedestal that was beautifully etched.  This combination coral and etched platform fits snugly in the silver arrowhead-shaped foundation which was beautifully etched with hooked designs.  Attached to the leather are silver tips, each of which has an attached silver barrel and and additional free-swinging barrel.  The leather is flat in the area of the back of the neck for comfort.

The pendant is signed J. LOVATO STERLING IHM with the Thunderbird Studio hallmark, which was bequeathed to Lovato after Frank Patania Senior’s passing.  IHM stands for Indian Hand Made.

Julian Lovato was born at Kewa Pueblo in 1922. His parents and grandparents were jewelers, who worked cutting and shaping turquoise. He began assisting his elders at the age of nine. He joined the military in 1940, and after the war he returned to New Mexico. Lovato was hired to work at Frank Patania’s Thunderbird Studio. His work is some of the finest of late twentieth century Native American jewelry.

Provenance: this Julian Lovato Sterling Silver Arrowhead Shape Bola with Coral and Silver Tips is from the collection of a gentleman from Albuquerque BOLA TIE New Symbol of the West [SOLD]
by