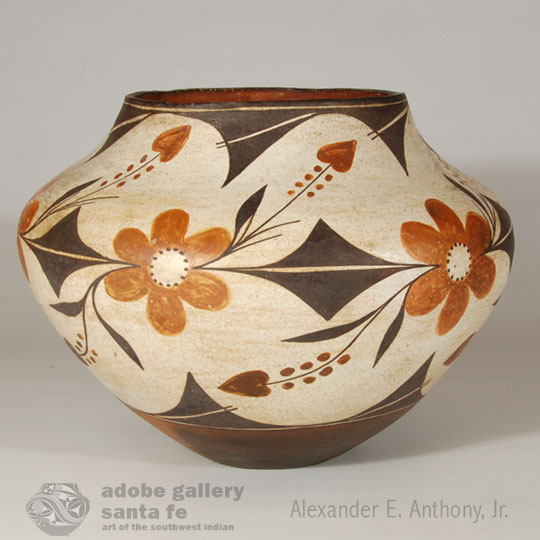 It is well recognized that it is difficult to determine if a particular jar was made at Laguna Pueblo in the early 20th century because they have a similarity to those made at Acoma Pueblo.  It is easier to attribute a jar to having been made at Acomo, thereby eliminating the justification for having stated it was made at Laguna. If Rick Dillingham was correct in his analysis of pottery from Acoma and Laguna Pueblos, then we have some design facts to use as justification for selecting Laguna as the origin of a jar.

He also quoted a contemporary Laguna potter who said  “Laguna designs are less busy” than those of Acoma potters. She indicated that Acoma potters like to fill in all open spaces with designs.  Dillingham 1992: 112

Laguna pottery is generally considered to be heavier than Acoma pottery, primarily because of thicker vessel walls.  Acoma prides itself in achieving very thin-walled pottery.

This jar has several features that lend to an attribution of Laguna Pueblo.  The floral and black triangular designs are chain-like in positioning. The heart-shaped flower at the end of a stem that has berries attached is another trait that can be linked to Laguna, in this way—potters who migrated from Laguna to Isleta Pueblo a couple hundred years ago took with them techniques and designs from Laguna and continued using those designs on what is now considered Isleta pottery, although its style originated at Laguna.  One of those features is flower stems with berries, easily seen on many Isleta bowls today. This jar clearly illustrates that design. The vessel walls are thin but not as thin as most Acoma jars.

It is for those reasons that we are attributing this jar to a potter from Laguna Pueblo in the 1930s.  As is typical of historic wares, it is not signed with the name of a potter or the name of a pueblo.

Provenance: from the collection of a California family 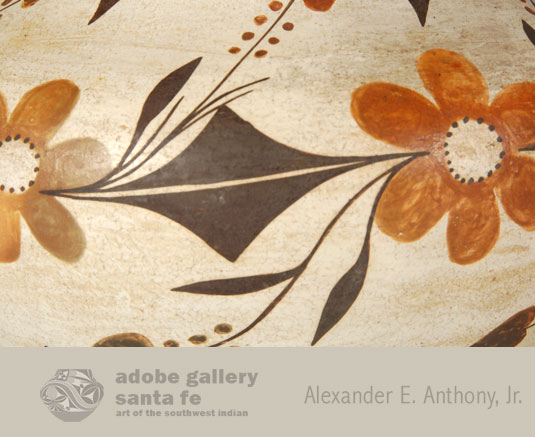