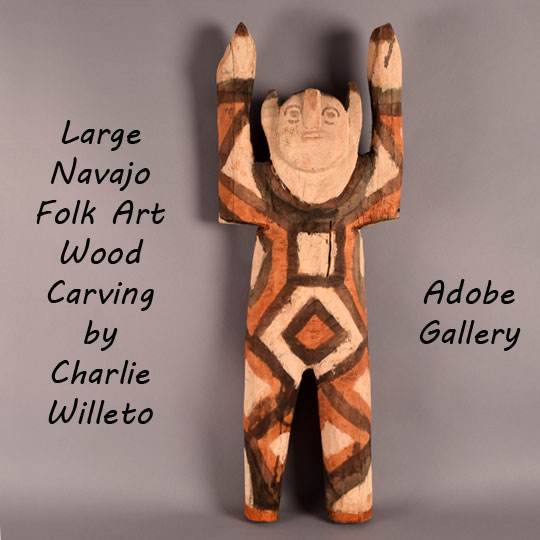 This wood carving was created by Diné of the Navajo Nation artist Charlie Willeto.  At over two feet in height and nearly ten inches in width, it is larger than the average Willeto carving.  The scale is exciting, of course, but it’s not the only notable attribute.  The painted designs that appear here are exceptional, and the piece as a whole has a strong and appealing presence. This is a fine example of Willeto’s work.

Willeto created an interesting pattern for the painted designs.  Large white diamonds appear repeatedly, with framing lines in black and wispy red-orange creating larger diamonds and long winding lines.  In the center of the figure’s chest, a white square appears.  Variations of the diamond pattern emerge from the central square’s lower end, and larger triangular forms appear up above, creating what some might interpret as a separate figure within the larger whole.  Each element falls right into place alongside its neighbors, creating a smooth and rhythmic pattern that covers the entirety of the carving.  It all works together wonderfully, creating one of the most appealing Willeto carvings that we’ve had the pleasure of handling.

Charlie Willeto (1897-1964) was a Diné artist who was unrecognized during his lifetime but has, in recent years, received a great deal of acclaim for his folk art carvings.  Willeto’s father, Pablo Walito, was a Diné medicine man; his mother Adzaan Tsosie “Slender Woman” was a medicine woman. Willeto himself followed into his parents’ profession, and also married a woman who was born into the traditional Diné healing arts.  At the time of Charlie and Elizabeth’s arranged marriage, he was almost fifty and she was 18. They would go on to have six children together, many of whom would become artists themselves. Willeto was a Yei-bi-chei dancer, and his earliest known carvings were what he referred to as “replicas” of the Yei-bi-chei.  His elders discouraged him from continuing to make his “replicas'', and he moved in a different but similarly controversial direction.

In 1961, Willeto began creating the carvings for which he is celebrated today.  These works—his early pieces, in particular—bore a resemblance to the “illness” or “healing” dolls made for use in Diné ceremonial functions. They always featured some sort of deliberate aberration, though, as the recreation of these dolls was frowned upon by the Diné.  Humans, anthropomorphic figures and all manner of animals were Willeto’s preferred subjects. He painted his carvings with house paint, chalk, crayons, and his wife’s weaving dyes. The carvings ranged in size from a few inches tall to nearly life-size, with the majority standing between one and three feet.  Willeto bartered his carvings for provisions with trader Jim Mauzy. Mauzy then sold and traded Willeto’s carvings to other dealers and collectors. Willeto is believed to have completed about 400 carvings in total. Today, his works are included in many prominent public and private collections, including the Smithsonian and the Museum of International Folk Art.

Provenance: from a private collection, originally acquired from art dealer John C. Hill.  Pictured in one of Mr. Hill’s advertisements, which will be included with the carving.