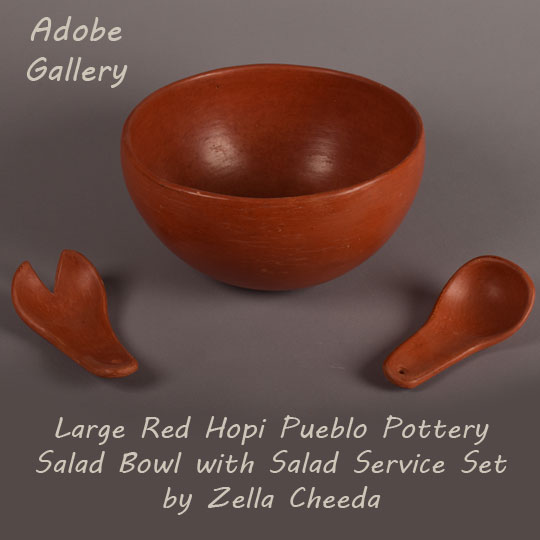 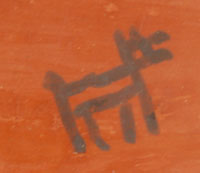 This large and deep Hopi Pueblo redware pottery bowl, with redware pottery fork and spoon, was made for use as a salad serving bowl.  Each of the three pieces is signed with the potter’s antelope hallmark. Perhaps there are other similar ones but this is the first and only salad bowl with serving utensils I have ever encountered from any pueblo.  Quite an inventive idea by Antelope Woman.  This set was purchased by the current owners at the Museum of Northern Arizona Hopi Craftsman Exhibition in 1972.  The sales tag for the purchase is included with the set.

Zella Cheeda was known as Antelope Woman or Antelope Girl and signed her pottery with the image of an antelope.  She was Hopi from the First Mesa village Sichomovi and was an active potter from 1950 to 1980.  She was particularly well known for her redware Hopi pottery such as this bowl with a pottery fork and spoon.  She is represented in the Museum of Northern Arizona and the National Museum of the American Indian collections.  She was born in 1901 and passed away in 1997.

Provenance: this Large Red Hopi Pueblo Pottery Salad Bowl with Salad Service Set by Zella Cheeda is from the estate of a Santa Fe family who made frequent visits to the Hopi Mesas