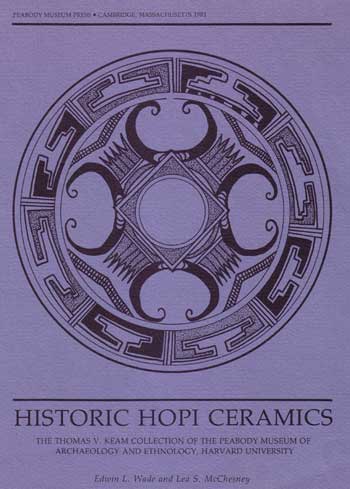 This book is very scarce/quite difficult to come by and truly an invaluable resource for the study of Historic Hopi Pottery.

From the Book:
Archaeologists have tended to dismiss historic Hopi ceramics (A.D. 1540-1900) as technically and aesthetically inferior to prehistoric Hopi pottery. The few studies of this pottery available are characterized by inadequate sample sizes and the assumption that historic Hopi potters were conservative and their design systems slow to change.

Recent preliminary studies of the nearly 1500 historic Hopi ceramics in the Thomas V. Keam Collection at the Peabody Museum of Archaeology and Ethnology, Harvard University, indicate that radical changes in design systems and vessel forms occurred frequently throughout the historic period. Many of the innovations in motifs, design layouts, and vessel shapes were introduced by Eastern Puebloans who fled Spanish control during the seventeenth and eighteenth centuries. Spanish-derived motifs and vessel shapes also appear, both as a result of direct contact with the Spanish prior to 1680 and later as a result of contact with Eastern Puebloans who had incorporated Spanish motifs into their own designs.

Studies of the Keam Collection provide an unparalleled opportunity to examine the effects of migrants on the material culture of host societies. When cultures mix as a result of immigration, each may retain its own distinctive art forms, or the immigrants may adopt the art styles of the hosts. A third alternative is to combine various cultural traditions into a new synthetic tradition. It appears that the Hopi chose the latter alternative, for in the centuries following the Pueblo Revolt they produced a distinctive ceramic tradition and style that was Hopi only by virtue of its place of origin.