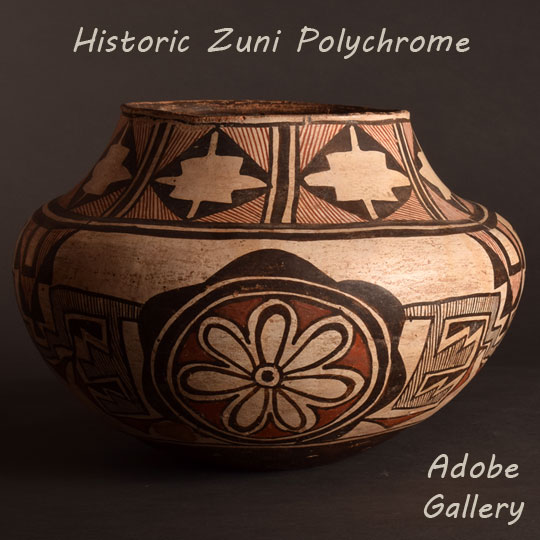 There have always been strict guidelines at Zuni Pueblo regarding pottery decoration, yet each potter has also always had some degree of freedom. The things that seem to be traditional and inflexible are the manner in which the main body decoration and that of the neck are separated. According to Zuni informants to Ruth Bunzel in 1924 and 1925, it is imperative that the first bit of decoration that goes on any Zuni jar be the black framing line or pair of framing lines that separate the neck from the main body. It is also imperative that this line or pair of lines not be connected. Today we refer to this as a ceremonial break. The informants were explicit in these statements. Another noticeable aspect on Zuni jars is that there is no correlation between the design of the neck and that of the body of the vessel, except that a certain harmony is preserved between the two.

The middle of the 19th century saw changes occurring in Zuni pottery designs.  Potters began to experiment with new designs that were more elaborate than previous ones.  (Note the elaborate body design on this jar.)  More surface of the vessel was filled with designs than previously.  A puki impression is quite discernable on Zuni jars up until the 1920s at which time it generally was sanded off to provide a smooth transition from the lower- to mid-body. (There is a puki line on this jar.)  The neck design on early Zuni Polychrome jars was generally divided into panels rather than one continuous band.  (This jar has eight panels, each with a white star in the center and triangles with red parallel lines in the four corners.)

This jar certainly has all the attributes of a late 1800s origin.  It dates to no later than 1890 based on the puki line, complicated body design and panels of design on the neck.  The medallions are simpler than those on jars after 1900 and the lack of heartline deer is another indication of pre-1900 origin.

Provenance: from the estate of a former resident of Atlanta, Georgia, passed down in the family

Recommended Reading:  The Pottery of Zuni Pueblo by Harlow and Lanmon

Signs from the Ancestors: Zuni Cultural Symbolism and Perceptions of Rock Art (Publications of the American Folklore Society)
by M. Jane Young