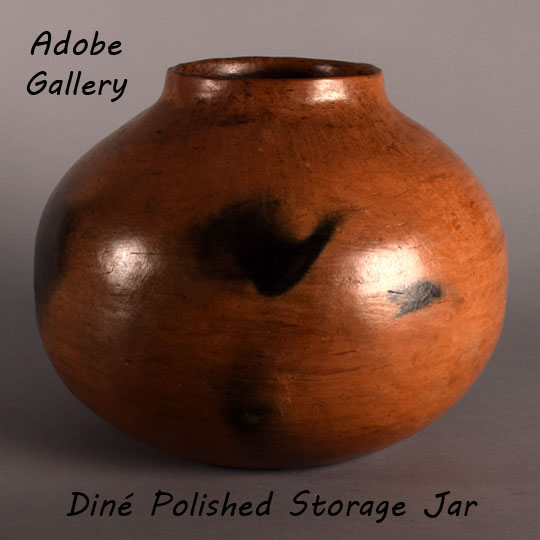 This jar is typical of traditional Diné wares in its construction. The clay was stone polished, and decoration was limited to a nice display of fire clouds.  The interior and exterior were covered in piñon pitch, in traditional fashion of Diné potters.  The jar is a beautiful globular shape with a vertical rim.  The golden color highlights the fire clouds beautifully.  It is signed on the underside by Linda K. Wilson.

The Navajo have traditionally made pottery for their own use, consisting mainly of cooking or drum jars, medicine jars, bowls, dippers, and pipes. Jars far outnumbered all other vessel shapes. It was not until after World War II, when traveling resumed and highway construction commenced on the Navajo Reservation, that pottery production increased. Prior to that, only three paved roads bordered the reservation, and none crossed into it, therefore there were no incentives to produce something for sale when there were no buyers.

The decade following World War II was one of transition and revival in pottery from the Navajo Reservation. As tourists began visiting the reservation, there became a need for inexpensive items for them to purchase as souvenirs: items less expensive than jewelry or rugs. The traders encouraged the women to make pottery to fill this need. Thus, we have the creation of a new marketable item.

The Diné have traditionally not painted designs on their pottery. It was considered bad to do so. It could cause a catastrophe such as an earthquake. Since the 1980s, we have seen the rise to painted pottery, but only by a few potters. The more traditional ones still will not do it. It was only in the last couple of decades that potters even began the simple task of taking the rope around the neck and letting it slide down and become body decoration.

Provenance: this Linda Wilson Diné Natural Slip Polished Storage Jar is from the estate of Henry Christensen III, former New York City attorney, to whom we sold this in 2003.