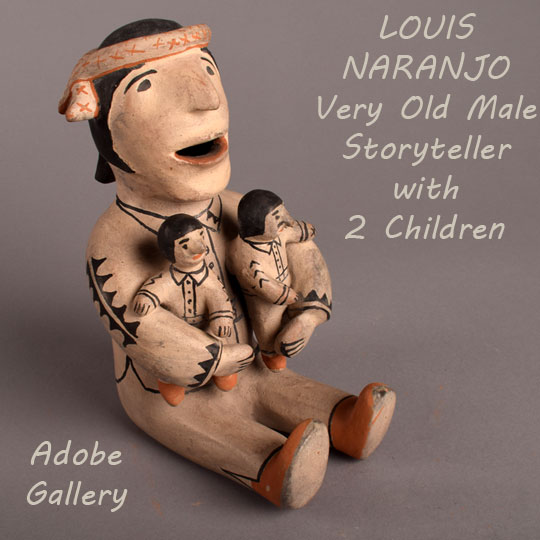 Cochiti Pueblo artist Louis Naranjo created this pottery storyteller figurine.  It must be one of his very earliest creations and it looks so very much like the work of his mother, Frances Naranjo Suina.  The face of the male could easily be compared to those by Suina.  Louis later developed a style that is easily identifiable as his, but this early one is an indication that his mentor was his mother.

The male has high cheekbones, a long-pointed nose, painted eyes and eyebrow, and an open mouth.  He is dressed in a collar and button shirt with painted design on the sleeves.  He clutches two boys in his arms, and they are dressed in the same style as the adult.  The figurine is signed with the name of the artist.

We purchased this figurine in 1982 from Teal McKibbin, of La Bodega Gallery on Canyon Road, for our annual storyteller exhibit.  We sold it to the client from whom we now have it back.