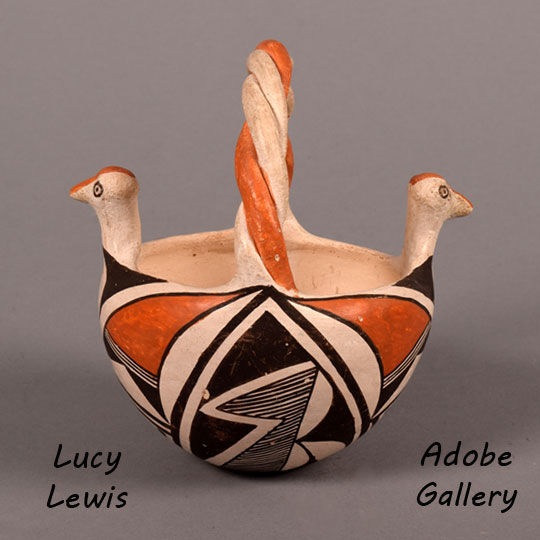 This unusual pottery piece was made by famous Acoma Pueblo potter Lucy Lewis. A small polychrome bowl serves as the base of the piece. It is decorated with traditional Acoma design elements in black and orange, over the typical white slip. Lewis worked mostly with triangular forms for this piece, bending her designs gracefully around the bowl’s curved sides.

Additional clay elements emerge from the bowl’s rim. A pair of small bird heads appear on opposite sides, staring directly outward. Directly between the two birds, a handle made of three twisted clay coils crosses from one end to the other. Two are white and one is orange, placing the handle in balance with the bowl from which it rises. This is a sweet and unique piece from the great Lucy Lewis. Lucy Martin Lewis (1898-1992) was one of the most widely respected potters from Acoma Pueblo. She was one of the last Acoma matriarchs to live full-time on the mesa top.  She followed pueblo tradition in every step of pottery production—offering prayers of thanks to Mother Earth for the clay, taking only as much clay as she needed, working the clay with only her hands, forming the vessel from coils of clay, scraping the walls with tools fashioned from gourds, painting the vessel with slips and paints made from clay and vegetal sources and, finally, firing the finished pieces in an outdoor handmade kiln.  Lucy signed her pottery as Lucy M. Lewis.  She was born in 1898 and passed away on March 12, 1992.  She spent nearly all her life atop the high mesa of Acoma Pueblo, making pottery since the age of 7. She is largely responsible for the revival of Mimbres black-on-white pottery designs which are more than 1,000 years old. She was famous, as well, for her exquisite polychrome designs and her fine-line and lightning designs.

Condition: Good; some light abrasions and small pop-outs, but no chips, cracks or structural issues.

Provenance: this Lucy Lewis Polychrome Bowl with Twisted Coil Handle and Bird Heads is from a private Santa Fe collection A TRIBUTE TO LUCY M. LEWIS Acoma Potter [SOLD]
by