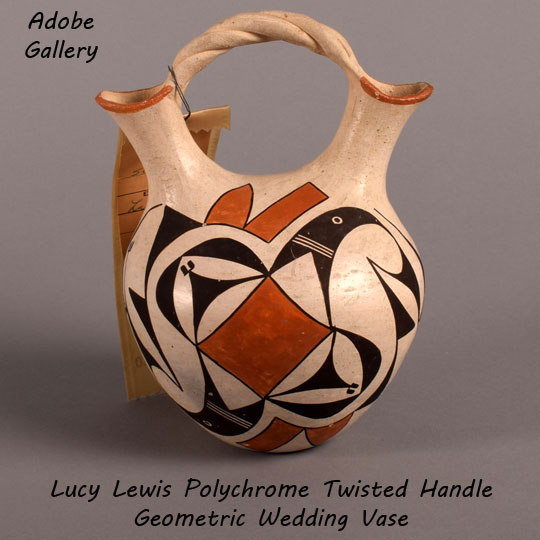 Lucy Lewis made pottery for almost a century, and this incredible wedding vase showcases what she was most known for.  The tradition of a wedding vase goes back farther than research allows, but is a beautiful experience where water is blessed before a union ceremony.  On the day of the ceremony one half of the wedding party drinks from one spout, while the other half drinks from the remaining spout.  The shape of Lewis’s wedding vase is traditional, yet also very much resembles a human heart– with branching arteries connected carefully by the twisted pottery handle.  A marriage of artistic and ceramic talent— the ancient romantic notion of bringing together two people in holy ceremony is showcased in this vase. The clay of Acoma is known for its light color and the very fine, lightweight pottery it can produce.  This wedding vase is no exception.  Lightweight and perfectly executed, a historic white slip solidifies the background color which is expertly decorated with the artist’s geometric take on an ancient Sikyatki design.  Highly stylized birds mingle with alternating geometric shapes, wrapping the body of this wedding vase entirely.  The rim of each spout has been carefully donned with light brown pigment and connects from one to the other via a twisted handle.

This wedding vase earned Lewis third prize at the Inter-tribal Indian Ceremonial in Gallup, New Mexico, in 1963, which would have been the year it was made. This competition is the longest-running, continuous event In the State of New Mexico and home to the oldest Native American art show in the country.

Lucy Lewis was one of the most widely respected potters from her pueblo. She was one of the last Acoma matriarchs to live full-time at the Pueblo. She followed pueblo tradition in every step of pottery production—offering prayers of thanks to Mother Earth for the clay, taking only as much clay as she needed, working the clay with only her hands, forming the vessel from coils of clay, scraping the walls with tools fashioned from gourds, painting the vessel with slips and paints made from clay and vegetal sources and, finally, firing the finished pieces in a handmade outdoor kiln.  Lucy signed her pottery as Lucy M. Lewis.

Lucy Martin Lewis was born around 1898 and passed away on March 12, 1992. She spent nearly all her life atop the high mesa of Acoma Pueblo, making pottery since the age of 8. She is largely responsible for the revival of Mimbres black-on-white pottery designs, which are more than 1,000 years old. She was famous, as well, for her exquisite polychrome designs and her fine-line and lightning designs.

Condition: Natural abrasion to the slip has occurred, and there is a smattering of pinpoint spalls to the surface of the vase.  This vase is in good condition.