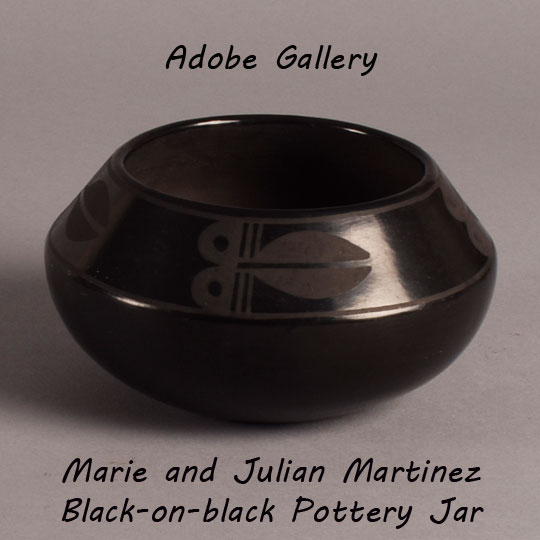 This jar is typical of the magnificent early works of Maria and Julian Martinez.  It is signed with the name Marie. These early pottery were signed only with her name, even though Julian painted the designs, and fired the finished product.  Pottery was considered “women's work” so his contribution was as a painter, not a potter.  By the time of the first Santa Fe Indian Market (today’s name) in 1922, signed pottery began to be an acceptable practice, although it would be several years before it was practiced by many potters.

The matte painted design by Julian is one of his earlier styles, rendered in simple and elegant elements.  The design is possibly rain clouds, but may be just an artistic creation without meaning.  There is an early paper label on the underside guaranteeing the jar to be an authentic handmade item from San Ildefonso Pueblo.

This jar is among several that were collected by Mary Louise Mark of Westerville, Ohio.  Ms. Mark (1878-1972) was a Professor of Sociology and Statistics at Ohio State University.  She acquired most of the collection during her participation in 1927 on a “Survey of the Conditions of American Indians” sponsored by the Institute of Government Research (later known as the Brookings Institute.)