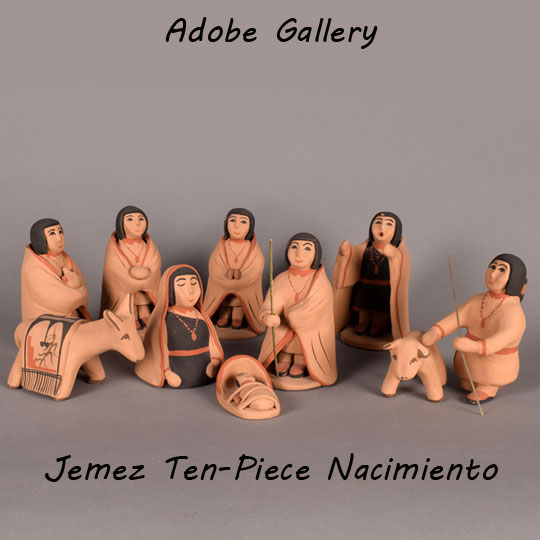 This nacimiento or pottery nativity set was made by Jemez Pueblo artist Marie Gachupin Romero, most likely in the late 1980s and is typical of the style she produced throughout her career, with some variations.   The pigments are all natural and were left in a matte state. Later in her career, she stone-polished sections of the figures. She made her first set in 1975 and it sold immediately.  The following August she made some for Indian Market and the opening of the Indian Pueblo Cultural Center in Albuquerque, and then orders came flowing in for more. One of her sets was pictured in New Mexico Magazine. This set included Mary, Joseph, and Baby Jesus, an angel, three kings, a shepherd and his sheep, and a donkey.  Mary is kneeling with her eyes closed. Joseph is standing, is wrapped in a blanket, has a staff in his hand, and has his eyes open.  Baby Jesus is snugly secured in a cradle, with an ear of corn by his side.  The angel has her arms stretched in front with a blanket wrapped around from hand to hand. Each of the three kings is wrapped in a blanket and each carries a gift for the Baby Jesus.  One has ears of corn, one has a canteen, and the third one has a loaf of bread.  The shepherd is kneeling with his hand on the sheep, and he is holding a staff.  The sheep and donkey are standing, the donkey with a blanket draped over its back.

The potter signed one of the figures on the underside; the King bearing the gift of sacred corn.  Looking at the donkey below we see a close up view of the painted designs on the animals. Sometimes we like to guess as to what the designs mean. Here, we think that we are obviously seeing the sacred corn plant and the kiva like steps of a canyon. What might not be obvious are the heavy rain clouds and what might be rain (hash marks at the bottom) soaking into the ground. Water and corn are most precious in the Southwest deserts.  What do you think?

Provenance: this Marie Gachupin Romero Jemez Pueblo Ten-Piece Nacimiento is from the collection of a client from California