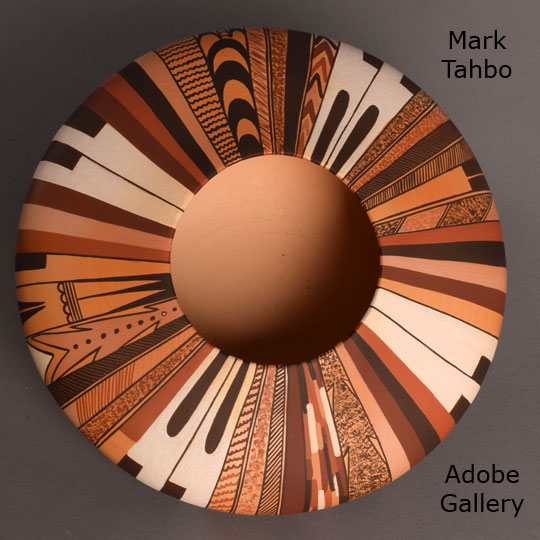 This is a most unique creation by Hopi-Tewa potter Mark Tahbo.  It was completed in 2004 and purchased from the artist at that year’s Indian Market in Santa Fe.  The visual effect is a proliferation of colors erupting from the interior and running down the wall of the jar.  Each color was laid on perfectly with straight lines.  The designs roll over the edge of the jar at which point they end in a variety of shapes and sizes.

Mark departed from the traditional Sikyatki-inspired designs of the prehistoric period and of the style reintroduced by Nampeyo of Hano at the turn of the previous century.  He created a design unlike any previously known at the pueblo.  It is a modern-looking masterpiece of explosive color and design.  It is testimony to the abundant creativity Mark possessed.

Mark Tahbo (1958-2017) was a Hopi-Tewa potter and a member of the Tobacco Clan.  He began potting actively in 1978. He came from a long line of outstanding potters, the most famous of whom was his great-grandmother Grace Chapella.  Grace Chapella, of course, is famous for living to 106 years and continuing to make pottery past her 100th birthday. His siblings were potters too. Mark made extremely thin-walled vessels and polished them to perfection. His designs were executed with remarkable precision.  Because of his fine workmanship, he received numerous awards at the Heard Museum Annual Indian Fair and the annual Santa Fe Indian Market.  In 1991, he won the Overall Prize at Indian Market.  In 1992 he was awarded Best of Division at the Heard Museum Indian Fair.  Awards continued to be presented to him throughout the rest of his career.

Mark passed away on December 22, 2017. He was a friend of Adobe Gallery. We enjoyed his frequent visits, the education he provided us, and the enthusiasm with which he shared his works. It is always a pleasure to be able to present his pottery to our clients.  It is an even greater pleasure to see something as creative as this jar.  It reinforces just how talented and creative he was as an artist.

Provenance: this Unusual and Extraordinary Mark Tahbo Hopi Pottery Seed Jar is from the estate of a previous client of ours who had impeccable taste and purchased accordingly.