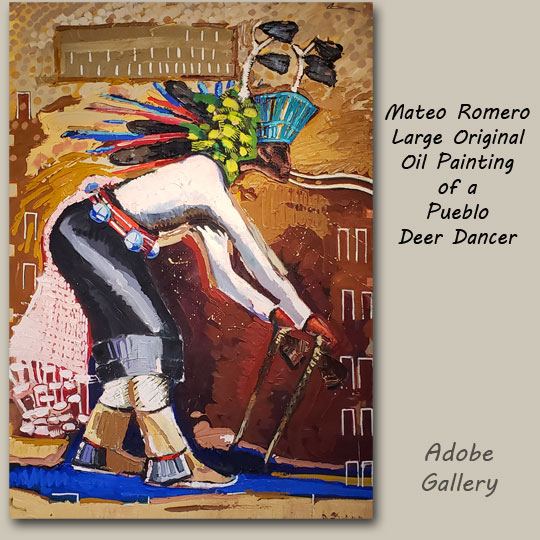 This painting of a deer dancer was made in the early ‘90s by Cochiti Pueblo artist Mateo Romero. At 60” x 42”, this is a massive image that makes a strong impression. Romero’s artist statement provides information relevant to this piece: “Timeless, archaic elements of Pueblo culture are juxtaposed with contemporary abstract expressionist palette knife and brush work. Overall, the paintings develop a rhythmic, hypnotic, trancelike feeling which is referential to the metaphysical space of the Pueblo and the dance itself.”

In the background, Romero formed an abstracted view of the pueblo in earthy tan and brown tones. The dancer appears in the foreground, hunched over and leaning forward with arms outstretched. Those who have witnessed pueblo animal dances will recognize this movement, which Romero captures beautifully here. A variety of bold, bright colors appear, mostly in the headdress but also in unexpected areas—soft pink tones form the dancer’s sash, and the ground beneath his feet holds an energetic wash of blue. The dancer’s face is focused and confident, which feels appropriate, as the larger image could be described similarly. This beautiful painting invites the viewer into a dreamy world of spiritual expression.

The painting is signed Romero in upper right. The canvas is gallery wrapped around a wooden frame.

Contemporary Pueblo painter Mateo Romero was born and raised in Berkeley, California. Although his cultural background is an urban one, through his father Santiago Romero and his connection to the Southern Keresan Cochiti people, this experience includes much of the Rio Grande Pueblo world as well. Mateo attended Dartmouth College and studied with acclaimed artists Ben Frank Moss and Varujan Boghosian.

He received an MFA in printmaking from the University of New Mexico. Mateo is an award-winning artist who has exhibited internationally in Canada and in the United States. He was a Dubin Fellow in painting at the School for Advanced Research in Santa Fe, NM, and paints in his studio in Santa Fe and lives in Pojoaque Pueblo with his wife, Melissa, and their children Erik, Povi, and Rain. [Bbiography source courtesy of the artist]

Provenance: this Mateo Romero Large Original Oil Painting of a Pueblo Deer Dancer is from a private New Mexico collection, purchased from the artist in the early ‘90s