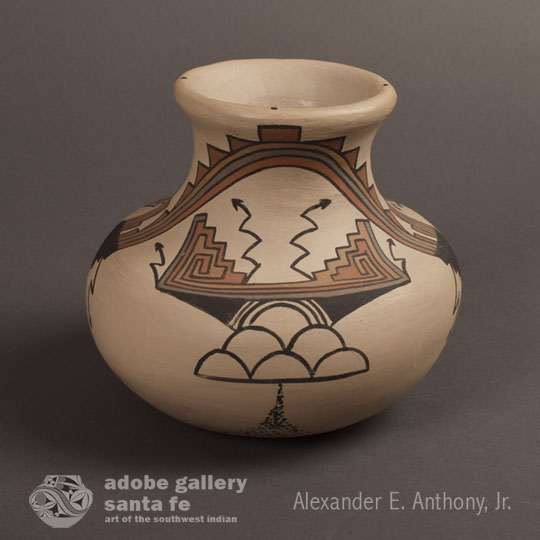 Lois Gutierrez and Derek de la Cruz’s pottery is distinctively different from the work of most Santa Clara Pueblo potters. According to Stephen Trimble in the book Talking with the Clay, “Lois and Derek have developed a distinctive slip by adding white to dark-gold clay to make a buff background color—Derek walks the hills in search of new clays. Lois says that he nearly always ‘sticks in an experiment whenever we’re firing to see how a certain color is going to come out.’” They have devoted a great deal of time and energy into experimenting with and utilizing various different pigments. This provides them with a wide-ranging palette for their intricately painted designs.

Four multi-colored terraced symbols were painted on the neck of this polychrome jar. These carefully executed designs could very well represent the four mountains that border the Tewa world—San Antonio Peak at the north, Sandia on the south, Tsikoma at the top of the Jemez on the west, and Lake Peak or Truchas Peaks in the Sangre de Cristo Mountains. The overall design concept on this jar is “rain.” There are rain clouds dropping rain at the mid-body of the jar and clouds and lightning on the shoulder. Rainbows arch over the body designs on the neck above the mountains.

Lois is a daughter of Petra Gutierrez and sister to Gloria (Goldenrod) Garcia, Thelma Talachy, Lupita Gutierrez, and Minnie Vigil, all of whom are outstanding potters as well. Lois and Derek started working together in 1970. The jar is co-signed Lois-Derek.

Provenance: Originally from the collection of Katherine Rust of Albuquerque, New Mexico. It has come back to us from a collector who purchased it a few years ago who is now downsizing.

Recommended Reading: Talking with the Clay: The Art of Pueblo Pottery by Stephen Trimble