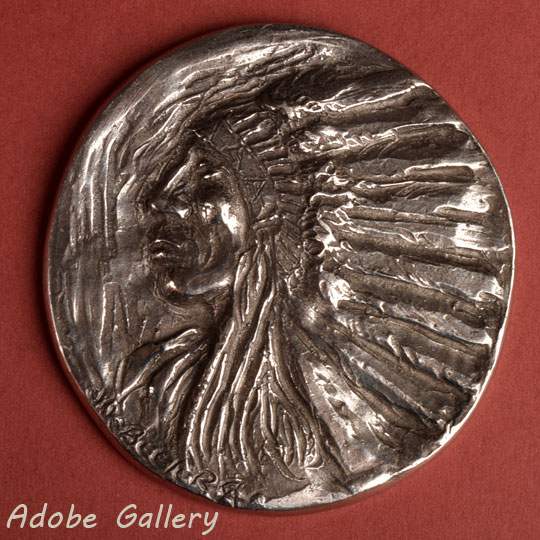 This round medallion of the bust of an Indian was commissioned by Eddie Basha, an Arizona resident, from Joe Beeler, a famous western artist of Cherokee descent.  It is impressed with the artist name on the front and “from Eddie Basha” on verso.

The following information is from an article by art appraiser Christy Vezolles (Shawnee) published in Native Peoples magazine, November-December 2012.

“Although this medallion isn’t made of silver, it is still fairly valuable.  It is from a series of 27 different medallions made by artist Joe Beeler.  They were commissioned by uber-collector Eddie Basha, Jr. . . .chairman of Bashas’ Grocery Stores in Arizona, to give to friends as Christmas gifts ca. 1975-2005.  They were made in editions of about 1,000, mainly in pewter and some in bronze.

“Beeler, of Cherokee descent, was born in 1931 on the Missouri/Oklahoma border, where as a boy he learned to rope, ride and hunt and participated in war dances at the Quapaw powwow.  As a young man he served in the Korean War, married and started a family.  As a struggling artist, it was not uncommon for him to put down his paintbrush and go out and shoot a rabbit for the family dinner.

“The family moved to Sedona, Arizona in 1962, where, in 1964, he and two other artists founded the prestigious Cowboy Artists of America organization.  Their marketing efforts propelled upward the demand and prices for western art.

“Very popular among western art collectors, Beeler, who passed away in 2006, was an award-winning painter and sculptor of cowboy and Indian life as lived in the late 1800s.  Though these medallions were originally given by Basha as gifts, they sell for as much at $250 on the secondary market.”

Condition: this Commissioned Metal Medallion made by Joe Beeler is in original condition

Provenance: gifted from Eddie Basha to a Santa Fe resident

*The Cowboy Artists of America (CAA) is an exclusive organization of artists that was founded in 1965. It was founded in 1965 by four prominent western artists, Joe Beeler, Charlie Dye, John Hampton and George Phippen, who have all since died. Since its inception, the exclusive organization of artists has always been dedicated to portraying the lifestyles of the cowboy and the American West, both as it was and as it endures. The CAA was founded in 1965 in Sedona, Arizona and held its first art show in 1966 at the Cowboy Hall of Fame in Oklahoma City, Oklahoma. -Wikipedia

First on the Land: The North Carolina Indians [SOLD]
by