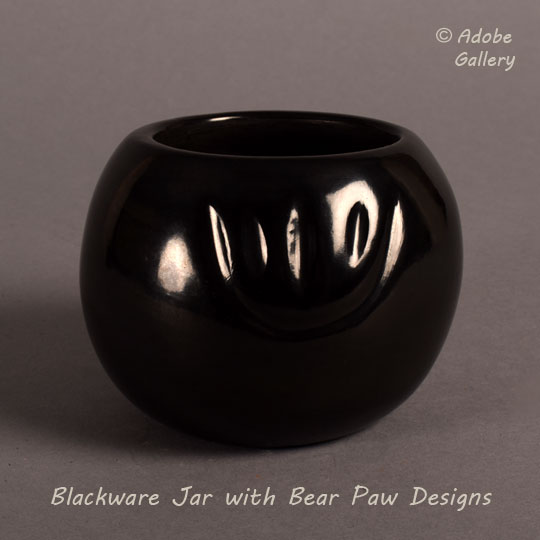 This polished blackware pottery jar with bear paw symbolism was created by Santa Clara Pueblo potter Mida Tafoya. It's a small, round jar with a flat base that is similar in diameter to the open rim. There is nothing complex about this piece, and it is all the better for it.

Tafoya embellished the jar in a traditional manner with the addition of two bear paw designs. They appear on opposite sides of the jar, reaching up from the jar's widest point to about a half an inch below the rim. It is a simple, strong design that has been used by many generations of Santa Clara Pueblo potters, and this particular execution works well with the vessel. The jar's exterior is polished beautifully, creating the reflective black look that collectors admire.

The bottom of the jar is signed Mida Tafoya, Santa Clara Pueblo.

Mida Tafoya (1931 - ) is a member of the famous Tafoya family of Santa Clara Pueblo. Her mother was Christina Naranjo, and her grandmother was Sara Fina Tafoya. She is the niece of Margaret Tafoya. Mida began making pottery in 1945 and, like many pueblo potters, was taught by her family.