Betty Barrackman often signed her pottery with her clan name Norge.  She lived in Needles and was a self-taught potter who was productive in the 1960s and 1970s decades.  She made a variety of vessel and human and animal shapes. Unlike other potters, she often fired her pottery in a kiln.  Barrackman’s husband was active in tribal government and she took care of the extended family. As a result, her pottery output was limited.

“Norge caught the robust nature of Mojave men, whose size and vigor were frequently remarked upon by travelers.  Lieutenant A. G. Tassin, who was stationed at Fort Mohave in the 1870s, extravagantly described the Mojaves as robust men and women ‘nearly eight feet in height.’  A decade later, Captain John J. Bourke wrote that both men and women were ‘famed for beauty of form; many of the gentler sex are lovely to look upon, in spite of tattooing.’

“Like most Mojave artists, Norge emphasizes the head and upper torso.  This figure’s long hair is parted in the center. Bulging eyes, outlined in black and containing pupils, dominate the face.  Some motifs, particularly those on the chin, may represent tattoos, while those on cheeks and forehead are more likely to be temporary painted designs.  Mojave men generally did not tattoo their faces above the chin.”  Furst 2001:96

The above description by Furst is of the male figure in the Dillingham collection which is now in the vaults of the School for Advanced Research, Santa Fe.  It, however, is a very accurate description of this figurine by Norge, as well.

This Mojave Male Pottery Figurine has dark body and face paint, genitalia, and is presented unclothed.  His hair was inserted in a hole in his head as is traditional for such dolls. He holds his arms out from his body in a muscular pose.  The artist signed her name on the figure’s back.

Condition: this Mojave Male Pottery Figurine by Betty Barrackman is in very good condition with minor chips on the right toes.

Provenance: from the estate of Henry Christensen III of New York who had purchased it from Adobe Gallery in 2004. 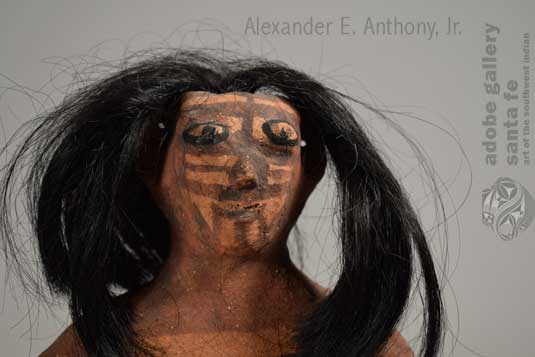