Original Photograph of a Morada by Woody Galloway [SOLD] 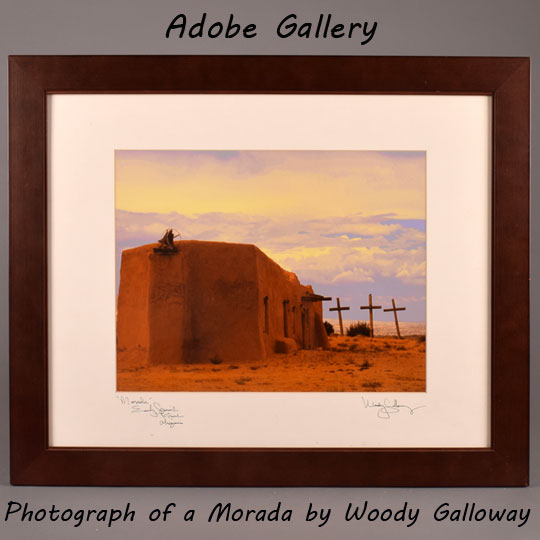 This original photograph by Woody Galloway is of the Morada of Abiquiu, New Mexico, a village about 50 miles north of Santa Fe.  This picturesque building was a sacred meeting site for the Penitente Brotherhood. Its members (Catholics of Spanish descent) dedicated themselves to community service and memorializing the spirit of the penance and the Passion of Christ. The Penitente Morada, which was originally built in the 1700s, and recently restored, is located up a winding dirt road within the village of Abiquiú.

The Penitente Brotherhood is a lay Catholic group known primarily for its penitential rituals that originated during the colonization of New Mexico by Spain in the late sixteenth and the seventeenth centuries. According to historical records, in 1598 Spanish colonists observed Holy Thursday with a variety of penances, including self-flagellation and walking barefoot. These practices were tolerated until the nineteenth century, when hostility towards bodily mortification grew within the Catholic Church. Following Mexico’s independence from Spain in 1821, the Penitentes began to construct their own sanctuaries after the Church implemented rules that threatened their practices. [Society of Architectural Historians]

The photographer, Woody Galloway, limits his prints to 100 copies.  They are not numbered; however, it is his policy to limit the number.  He signed the photograph on the mat in the lower right.  It is framed in a burgundy wood frame selected by the photographer.

AN ILLUSTRATED HISTORY OF NEW MEXICO [SOLD]
by