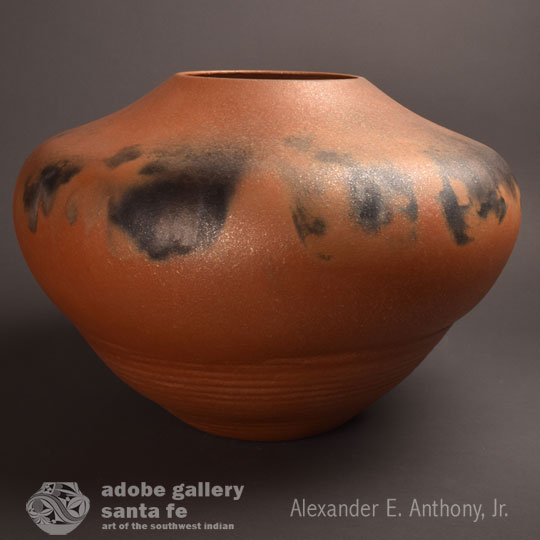 There is very little that is more beautiful than golden clay with micaceous flakes shimmering against the light, especially when it is in a piece of pueblo pottery that has dark black fire clouds scattered about. If the piece of pottery was made by master potter Lonnie Vigil, then you know you have acquired the best there is.

Lonnie used a traditional basket as the puki for starting this jar. The impressions of the basket coils on the clay were left as evidence by the artist. This was a form of recognition by Lonnie Vigil to the way pottery was formed by earlier generations.

This large jar was made 30 years ago by Lonnie Vigil and it is in excellent original condition. It displays a beautiful array of fire clouds. It is signed on the bottom with the artist's name and pueblo.

We have just read that the spelling of Nambe Pueblo that has been used for decades is incorrect. The correct spelling, according to an article in the Santa Fe Reporter, May 2020, is Nanbé, which means mound of earth in the corner, and the correct name is Nanbé Ówingeh. Ówingeh means community. This is from Cora and Brenda McKenna, Nanbé Language Revitalization Program. The Program recognizes the linguistic expertise of Melissa Axelrod, Ph.D., UNM Professor Emerita and the other UNM consultants who are part of the Program.

Provenance: this Very Large Micaceous Clay Pottery Jar by Lonnie Vigil of Nambe Pueblo is from a private collection