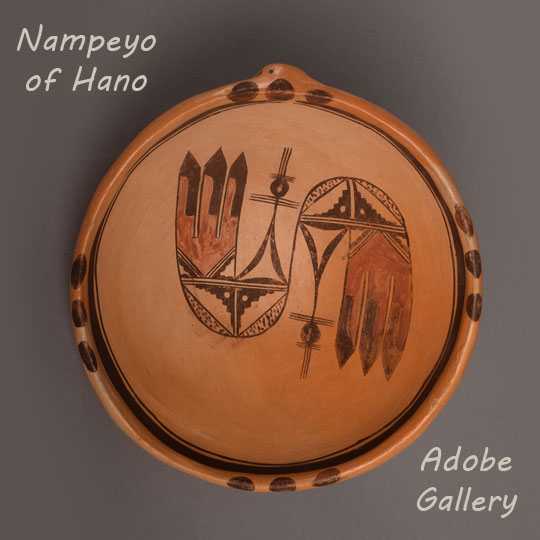 This bowl has all the hallmarks of the Hopi matriarch and master potter, Nampeyo of Hano.  In her early career, she made a small handful of bowls of this shape, size, and design (Kramer:1996; 179, 186). It is for this reason the bowl most likely dates to the first decade of the twentieth century.lu  The bowl features a sharper slope and a rim that is rolled slightly in.  The rim has added thickness and a hanging lug.  Four sets of three dots in dark brown pepper the edge.  A double spirit line breaks in its usual way directly inside the bowl's lip, from the placement of the lug, indicating this to be the top of the bowl.

After taking the time to authenticate this vessel as Nampeyo of Hano’s, it is the interior design that sparks admiration.  As an artist, she was often described to be more invested in perfection than in innovation.  The interior pictorial is one take on a Sikyátki spider.  Eagle feathers slide around in a serpentine way, incorporating rainclouds, kiva steps, and other geometric shapes.  From each of them we see a pendant hanging.  Each pendant has three groups of three parallel lines.

Although obviously inspired by the designs of ancient Sikyátki pieces, the creativity and original thought Nampeyo used sets this piece apart. While she may have had hallmarks, it can be further suggested, when considering this incredible vessel, one of them is most certainly innovation.

According to Kramer, “the spider design is seen on a seed jar in a Curtis photograph as early as 1904, and it reappears with modifications in bowls and jars during Nampeyo’s early work.” [ibid, 186]

Nampeyo of Hano (1857-1942) was a widely influential potter who lived and worked on the Hopi Reservation in Arizona.  Nampeyo is regarded today as one of the finest Hopi potters and one of the most important figures in Native American pottery.  Her work is displayed in museums and collections around the world.   Nampeyo was taught how to make pottery by her grandmother and began earning an income as a potter while she was still just a teenager.  Less interested in innovation than perfection, Nampeyo took an early interest in the design and form of ancient Hopi pottery, which she believed to be superior to the pottery being created by her contemporaries.  She visited the ruins of ancient villages and copied designs from pieces of prehistoric and protohistoric pottery onto paper, then reproduced the designs on her own vessels.

Condition: overall and especially for its age, this Nampeyo of Hano bowl is in very good condition.

Provenance: this Nampeyo of Hano Hopi-Tewa Bowl with Spider Design and Hanging Lug is from a private collection

Reference: Nampeyo and Her Pottery, by Barbara Kramer