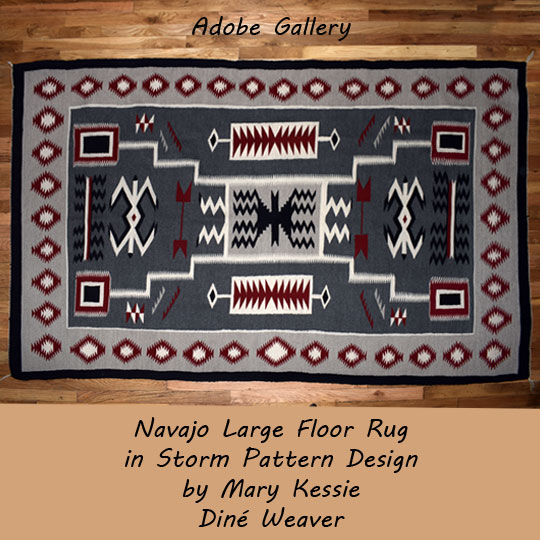 The design pattern of this Navajo textile is “storm pattern” and was created by Diné weaver Mary Keesie. The origin of the name is unknown, but it was in existence as early as 1900.  Crystal Trading Post trader J. B. Moore popularized it in his early catalogs.  Following the publication and distribution of the 1903 catalog, Moore published loose-leaf pages of 4 additional patterns—one of which was the storm pattern.  He stated that it was woven by “Dug-gau-eth-lun bi Dazhie.”  He does not state from where the pattern originated.

“The storm pattern rug, which would become associated with the western reservation area, is another style whose origins have been the subject of debate for decades.  Some say that the style is sacred: that the central rectangle represents the Navajo hogan and the rectangles in each corner represent the four sacred mountains of the Navajo legend.  The connecting lines between the central rectangle and the corner rectangles are said to be lightning bolts carrying blessings between the mountains and the hogan.  Other interpreters of Navajo design find this explanation fanciful; they believe the storm pattern design was influenced by the designs on flour sacks found on the trading post shelves.  J. B. Moore featured a storm pattern rug in his 1911 catalog, and some believe that the design was Moore’s own.  Almost certainly, the symbolism credited to the storm pattern rug is a product of imaginative Anglo marketing.”  [Kaufman and Selser, 1985:102] The four-legged creatures at the ends of the rug have been designated as water bugs.

Putting aside the origin and explanation for design, it is accepted as one of the most popular of the early J. B. Moore textiles.  This one is from the mid-twentieth century and was woven with commercial-dyed yarns. The talented Diné weaver was Mary Kessie from Pinon, Arizona.

Provenance: this Navajo Large Floor Rug in Storm Pattern Design by Mary Keesie is from the extensive collection of a family from Albuquerque