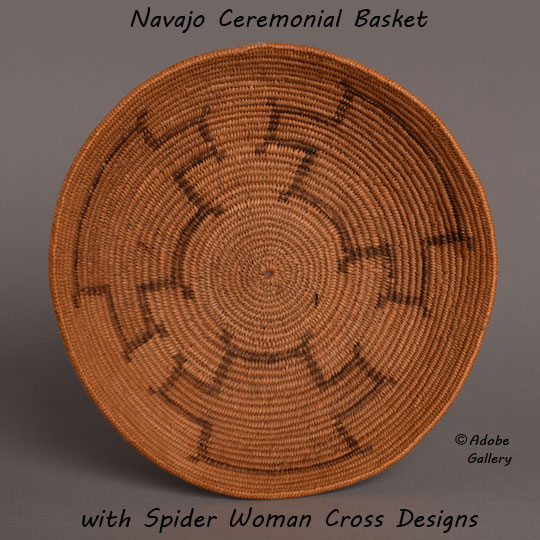 This old Navajo ceremonial basket is of a fine weave. Each weft stitch was placed relatively close to the adjoining stitch. The foundation was composed of rods of similar diameter resulting in a basket of consistent weave. Navajo ceremonial baskets are constructed with a rod foundation of willow or sumac. The background or light color in the basket is natural sumac. The black and red were dyed. The black dye is derived from sumac leaves, twigs, and berries crushed and boiled with a powder made from melted piñon and roasted ocher. The red comes from boiled mountain mahogany roots to which are added ashes of twigs of juniper and powdered bark of black alder.

Diné baskets or Ts'aa' have many uses. They are used ceremonially to hold prayer sticks and medicine bundles, because it is taboo for ritual objects to touch the ground. They are important for Kinaalda' ceremonies, the coming-of-age ceremony for young women at puberty, where they are used to hold yucca suds for ritual baths and hair washing of the young woman. They are used in wedding ceremonies to hold corn pollen and food.

Condition: good condition with minor fading of the red dye, and a few missing stitches in the weave.

Provenance: this Navajo Nation Ceremonial Basket with Spider Woman Cross Designs is from a private collection On the Trail of Spider Woman [SOLD]
by Carol Patterson-Rudolph