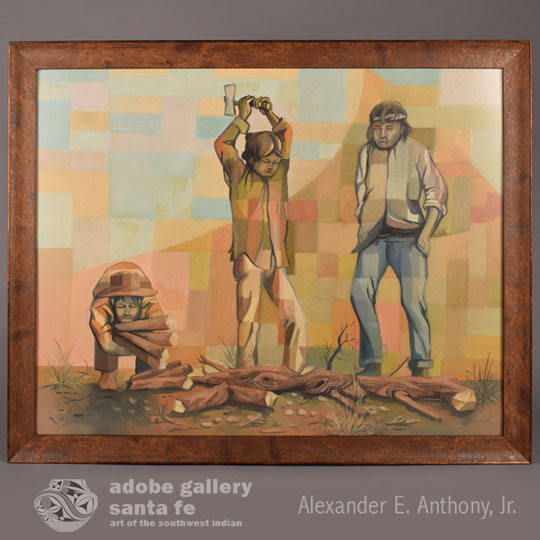 This Navajo painting of three Diné men gathering wood was made by award winning artist Guy Nez, Jr. The majority of his available artworks are oil paintings featuring Native pottery and baskets. Often, in the background, there's a ceremonial dancer, Katsina, or a detailed portrait of a Native person. With this piece, Nez shifted to a different subject and a different style, and he did so successfully. It is unlike any Native painting we've handled in the past. Nez' subject here is a group of Diné men chopping and gathering firewood. Each man faces the viewer directly. On the left, a man in a hat bends over, picking up firewood. In the center, another man raises an axe above his head, preparing to strike a log. On the right, a third man watches the younger man in the center.

Those who are familiar with Diné painting know that images featuring people going about their daily lives are not unusual.  This particular scene—men chopping firewood—is something we’ve not seen before, and the manner in which it’s depicted is even more atypical.  Nez composed the image using rectangular blocks in a wide variety of colors. In the upper left corner, they’re warm pastel blues, pinks and oranges.  In the lower right corner, they’re earthy greens, browns and yellows. A curving line crosses the image, dividing the two color groups and creating what could be an abstract depiction of a mesa in the background.  The men themselves are defined by thick black lines, and filled in with blocks of color which mostly match the background but occasionally venture off into new directions. This is an unusual and delightful Diné painting.

The painting is signed Guy Nez Jr. in lower left.  It is framed under acrylic in a brown frame.

Diné artist Guy Nez, Jr. was born in 1946 in White Cove, Arizona. He attended the Institute of American Indian Arts (IAIA) in Santa Fe on an art scholarship, and later attended Los Angeles Trade Technical College where he studied fine and commercial art.  He has won numerous awards for his work. Nez is a versatile artist, working as a jeweler, potter, sculptor and painter. Nez’s expertise and knowledge of ceremonies and clothing of his people is well illustrated in his paintings.