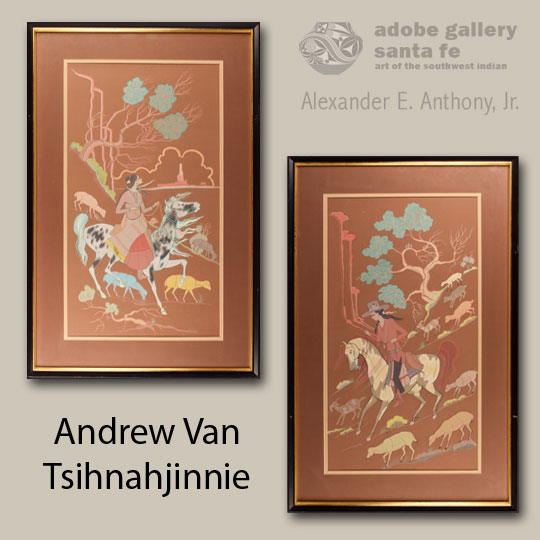 These two paintings by Andrew Van Tsihnahjinnie present classic Diné imagery in the unique style of one of the most inspired early Native painters. The paintings were clearly made and intended to be displayed as a pair.  Interestingly, we see this—paintings created and sold as complementary pairs—much more frequently from Diné artists than from Pueblo or Plains painters. Harrison Begay and Beatien Yazz worked this way frequently and effectively. These two Tsihnahjinnie paintings, when displayed together, provide an impressive display of his considerable talent.  Tsihnahjinnie’s subjects here—a man on horseback in one painting, a woman on horseback in the other—are also typical of the aforementioned Diné painting pairs. The artist respected tradition by presenting each figure in profile and adorned in the expected attire. It is the manner in which these figures are executed and the detailed scenes surrounding them that set this pair apart from similarly themed images.

Each human figure is remarkable.  Technically speaking, they’re near-perfect—proportions are accurate, clothing is more detailed than one might expect, faces are sensitively rendered and movements feel natural.  All of this could be said of the horses, too. They seem to have received extra attention here. The woman’s horse, in particular, is a vibrant wonder. Its outlines, its mane and its tail are highlighted with thin lines in a bright turquoise tone, lending the animal an otherworldly quality.  Each horse and rider is surrounded by sheep and goats, many of which have similarly non-naturalistic colors. These bright colors—greens, pinks, yellows—work wonderfully alongside the muted, earthy tone of the boards upon which they’re painted. Each figure is coming down a hill, with tall cliffs in the background.  Massive trees emerge from each of these hills, with winding branches reaching up towards the sky and down to the hills. Tsihnahjinnie composed and arranged these elements masterfully. Each image, on its own, is fantastic. When placed side-by-side, as the artist likely intended, the images combine to create something truly remarkable.

Each painting is signed “Tsinajinie” and framed in a thin black frame with a gold interior band.

Andrew Van Tsihnahjinnie (1916 - 2000) was a Diné painter who was born near Chinle, Arizona. He attended elementary school at the Indian School at Fort Apache, but ran away and returned to the reservation. He then attended school in Santa Fe and became a student of Dorothy Dunn at the Santa Fe Indian School. He was an excellent student and was known to have stayed in the studio painting until forced to return to the dormitory. Following his graduation he went to work as an illustrator for the Indian Service.

Dorothy Dunn spoke highly of Andrew Van Tsihnahjinnie.  She thought he displayed “incisive interpretation, spontaneity of brushwork, originality of color, vigor of draftsmanship and vitality of action and that he had no equals among the artists of the Santa Fe Indian School studio and perhaps few superiors among modern painters.”  She thought he might well be “one of America’s top-ranking painters. In the brief seasons when he felt freed to paint the things he knew so deeply, without troubled concern for doing otherwise, his work attained a trenchant beauty, unique in modern art.” Dunn 1963

Tsihnahjinnie’s works are included in many prominent public and private collections, and are published in most of the major texts which relate to Native painting.  Tsihnahjinnie passed away in 2000.

Condition: this PAIR of Large Navajo Paintings by Andrew Van Tsihnahjinnie is in excellent condition