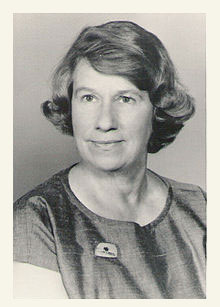 An American art instructor and painter, Dorothy Dunn created The Studio School at the Santa Fe Indian School.  Dunn was born on 2 December 1903 in Pottawatomie County, Kansas, and educated in Chicago.  She first encountered Native American art at the Field Museum in Chicago in 1925.

In 1928, Dunn traveled to New Mexico for the first time, where she taught second grade at the Santo Domingo Pueblo Day School, located south of Santa Fe.  She learned quickly from her young Pueblo students that many features of their culture were taboo to draw or paint.  In 1930, she moved to Shiprock, New Mexico, to teach at the San Juan Boarding School at the Northern Navajo Agency.  She finally returned to Chicago in 1931 to complete her degree at the School of the Art Institute of Chicago.

While completing her degree, Dunn outlined plans to teach art in the Civil Service at the Santa Fe Indian School and submitted her proposal to the superintendent Chester Faris.  She was given a position teaching fifth grade with a half-day to teach art to older students. The Studio School thus opened on September 9, 1932.  Established Native artists Julian Martinez and Alfonso Roybal painted murals at the school to welcome the young artists.

Engaged to fellow teacher Max Kramer and overwhelmed by conflicts with the school administration, Dunn resigned in the spring of 1937.  Geronima Cruz Montoya (Ohkay Owingeh Pueblo) replaced her as director and served until the Studio closed in 1962, when the Institute of American Indian Arts was established.

Dunn believed that her students had an innate artistic ability, a belief widely promoted by Native American art teacher Angel De Cora (Ho-Chunk) at the beginning of the 20th century.  Dunn taught the most basic fundamentals of painting while deliberately refraining from teaching life drawing, perspective, or color theory.  Her student body initially came from the Rio Grande and Western Pueblos, and the Plains tribes.  Each year the classes grew and represented a greater number of tribes.  By 1937, the final year that Dunn taught at The Studio, enrollment in the program was 170.

The style she taught featured heavily outlined flat fields of color, illustrative and narrative portrayals of ceremonies, dance, and mythology, painted primarily in opaque watercolors.  Dunn taught a single style of painting influenced by the work of the San Ildefonso painters of the 1910s and 1920s –- "a style that she believed, rightly or wrongly, was the only authentic painting style for Native American artists to follow."  The style she advocated, called the "Studio Style" or "flat-style painting," was inspired by Pueblo mural and pottery painting, Plains hide painting, and rock art.

Dunn's strict adherence to a single style of painting has been widely criticized, especially from within the Native American community.  Celebrated Chiricahua Apache sculptor, Allan Houser said, "she trained us all the same way... Her style lacked originality and creativity."  However, many of her students appreciated her efforts.  Geronima Montoya said that Dunn "did a lot for us.  She made us realize how important our own Indian ways were, because we had been made to feel ashamed of them.  She gave us something we could be proud of."

Dunn applied for and was rejected for employment by the Indian Arts and Crafts Board.  She lectured about Native American artand curated and judged art shows in the United States, Belgium, Italy, and Finland.  She published 18 scholarly articles in the 1950s.  The government of France named her an Officier d'Académie in 1954, and the School of American Research named her an Honorary Associate.  The Indian Arts and Crafts Board awarded her a certification of appreciation in 1962.

In 1968, she published the book, American Indian Painting of the Southwest and Plains Areas.

Her collection of paintings was donated to the Museum of New Mexico in the 1970s.  In 1992, Dunn's daughter, Ethel Kramer, donated her papers--scholarly and personal–-to that museum.

She died on 5 July 1992 in Mountain View, California, from Alzheimer's disease. She was buried in San Gorgonio Memorial Park in Banning, California.

- Biography Source from the Archives of AskART