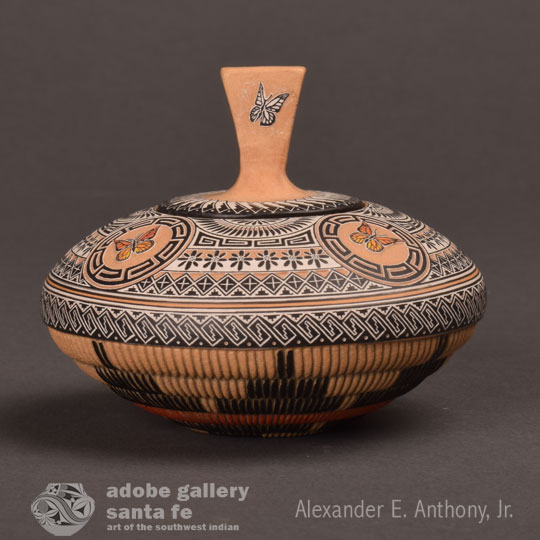 This small seed jar is a combination of sgraffito carving and painting.  It was so intricately designed and painted that it reminds one of Moroccan-inlay works.  Every millimeter of the surface is covered with design. Colorful butterflies are in circles on the top and also appear on the handle.  The underside was designed in the style of a Navajo ceremonial basket and each strip in the coils was individually carved, not just painted.

Forty-seven-year-old Wallace Nez (b.1972 ) has set the standard for contemporary Diné pottery.  He produces pottery in the traditional manner by gathering and processing natural clay, coiling and building the pottery, scraping and sanding and finally carving intricate designs on the surface.

According to the Heard Museum Gift Shop, Nez sold his first piece at the age of 12.  He won first-place ribbons at the Santa Fe Indian Market in 1999, 2000, and 2001 and Best of Division at the Museum of Northern Arizona Market Show in 1999. Signed on the underside are the artist’s name and the three-digit number 232.

Provenance: we sold this to a client in 2014 and now have it back as she is downsizing from a large house to assisted living quarters.

Recommended Reading: Miniature Arts of the Southwest by Nancy Schiffer